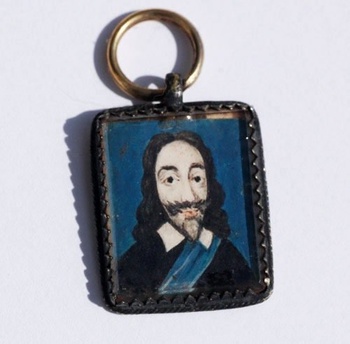 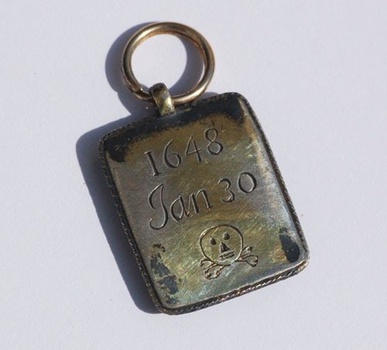 A rare 17th century naive portrait on vellum of Charles I, the English monarch brought to trial in Westminster in 1648 and subsequently executed on January 30th, 1649.

Such portrait pieces were made for Royalist supporters to mourn the martyred monarch and to support and further the cause of his exiled son. The pendant is silver, set with a watercolour portrait of the king wearing the blue sash of the Order of the Garter.

He is depicted with an air of doom and the background is painted celestial blue. The reverse is engraved with a skull and crossbones and dated 1648 Jan 30.

Whilst history documents the monarch's execution on the day of January 30, 1649, the date 1648 on this piece is based on the Julian calendar, which was used in England until the 18th century. Using the Julian calendar, the year did not commence until March, so many contemporaneous mourning pieces record the execution as having taken place in 1648.

The pendant measures 1 and 1/4 inches in length including loop, 3/4 of an inch excluding loop and it is 2/3 of an inch wide. There is a small chip on the crystal cover and the portrait has slipped down a little inside the compartment, but I feel it's best to leave it alone. A rare and charmingly naive Royalist pendant.