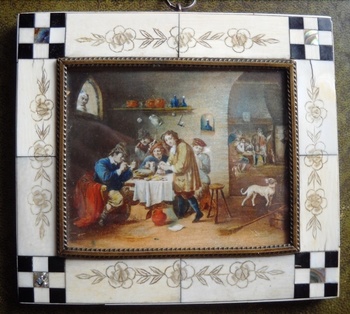 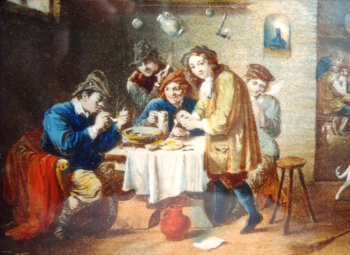 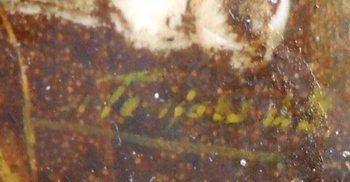 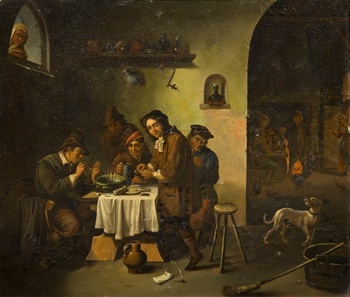 A tavern scene on ivory (9.5 X 8 cm). Marquetry wooden frame, bronze mount, inlaid work with ivory and mother of pearl.
The back is covered by an old page from the book with Latin text and a few words in Arabic and Hebrew, but that does not mean anything; even late 19th century miniatures are backed with much earlier printed pages taken from elsewhere.
The same image was sold as `` Artist Unknown, (18th century), Tavern Scene, oil on tin`` by Leslie Hindman Auctioneers, 2012. (Image 4 here).
The miniature is signed but cannot be deciphered. Two small strokes in front of the signature are often seen in miniatures as an abbreviation for ``n`` ``nach`` meaning ``after``. Or the first letter of artist`s name.
The problem is as follows:
1. Not very likely the artist is the same (a variant painted on tin in oil and the same miniature).
2. The painter of the miniature must have had close and full insight into the original painting to reproduce ever single detail.
3. Miniatures are commonly made after well known paintings but Leslie Hindman Auctioneers could not identify the painter. Had it been with another auction house, but now that it`s sold attribution is not possible to search for. After all, those tavern scenes were popular with Flemish painters, famous or unknown.

Almost the same frame is here:
http://www.antiques-atlas.com/antique/pretty_19th_c_miniature_painting_on_ivory/as145a616
Thanks for watching