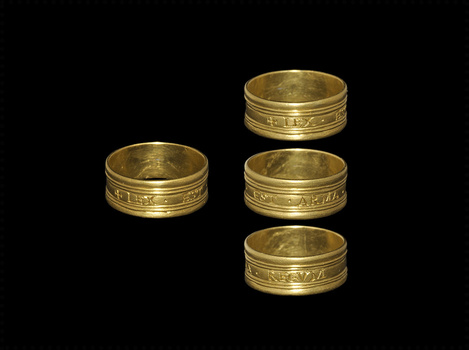 A broad gold ring (at least 22K) with ribbed bands flanking the text in seriffed capitals "+ LEX . EST . ARMA . REGVM" (law is the armour of kings) separated by a cross and small stars; traces of black enamel within the lettering. Extremely rare.

This ring was likely made for the general call of 1555 and believed to have been made by the goldsmith Nicholas Deering. There is a similar ring in the Victoria and Albert Museum (accession number M.54-1960).

From at least the fifteenth century, candidates who were to be admitted to the ranks of Serjeants-at-Law (from whom judges were appointed) were obliged to present rings bearing a suitable motto to the monarch and various dignitaries. The tradition ended when the rank of Serjeant-at-Law was abolished by the Judicature Act of 1875. According to an expert on these rings, while there may have been as many as 100,000 rings made over this 300 year time period, he has only tracked down 97 of the rings.

A good book on this topic is The Order of Serjeants at Law by J.H. Baker, published 1984.

A brief description from Wikipedia:

A Serjeant-at-Law (SL), commonly known simply as a Serjeant, was a member of an order of barristers at the English bar. The position of Serjeant-at-Law (servientes ad legem), or Sergeant-Counter, was centuries old; there are writs dating to 1300 which identify them as descended from figures in France prior to the Norman Conquest. The Serjeants were the oldest formally created order in England, having been brought into existence as a body by Henry II. The order rose during the 16th century as a small, elite group of lawyers who took much of the work in the central common law courts. With the creation of Queen's Counsel (or "Queen's Counsel Extraordinary") during the reign of Elizabeth I, the order gradually began to decline, with each monarch opting to create more King's or Queen's Counsel. The Serjeants' exclusive jurisdictions were ended during the 19th century, and with the Judicature Act 1873 coming into force in 1875, it was felt that there was no need to have such figures, and no more were created. The last Serjeant-at-Law was Serjeant Sullivan (d. 1959). The last purely English Serjeant-at-Law was Lord Lindley (d. 1921).

The Serjeants had for many centuries exclusive jurisdiction over the Court of Common Pleas, being the only lawyers allowed to argue a case there. At the same time they had rights of audience in the other central common law courts (the Court of King's Bench and Exchequer of Pleas) and precedence over all other lawyers. Only Serjeants-at-Law could become judges of these courts right up into the 19th century, and socially the Serjeants ranked above Knights Bachelor and Companions of the Bath. Within the Serjeants-at-Law were more distinct orders; the King's Serjeants, particularly favoured Serjeants-at-Law, and within that the King's Premier Serjeant, the Monarch's most favoured Serjeant, and the King's Ancient Serjeant, the oldest. Serjeants (except King's Serjeants) were created by Writ of Summons under the Great Seal of the Realm and wore a special and distinctive dress, the chief feature of which was the coif, a white lawn or silk skullcap, afterwards represented by a round piece of white lace at the top of the wig.