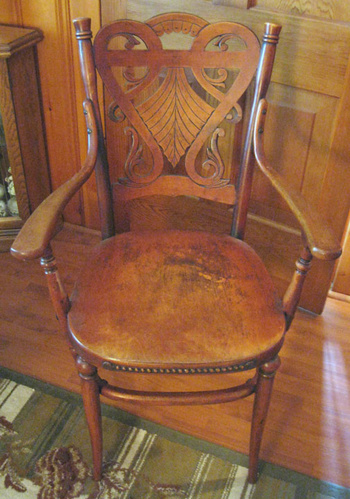 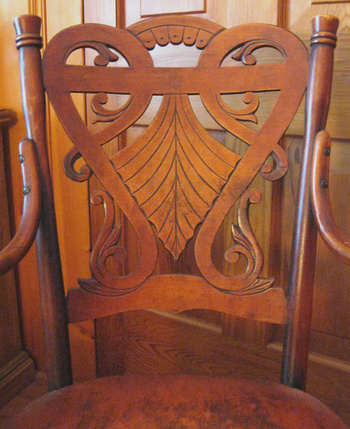 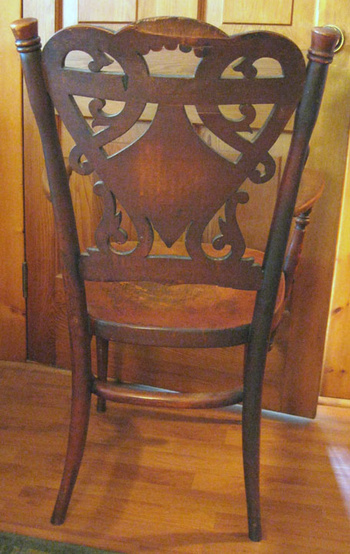 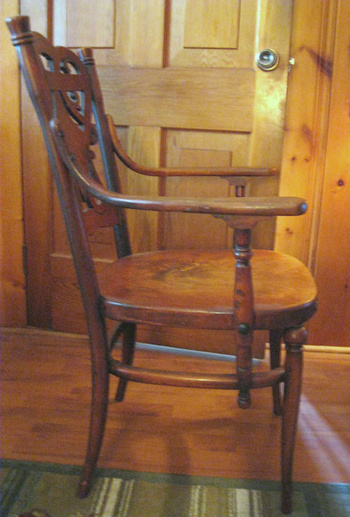 Would love any further information anyone could give on this chair....

Several years ago (2001?), this chair was taken to Casa Loma in Toronto when the British Antiques Roadshow was in Canada....

We didn’t get it evaluated by a British expert but by a Canadian expert. He told us because the back of the chair was “veneered” it was most likely a European chair; if it had been Canadian, he said the back would have been a solid piece of wood. He dated the chair to the late 1800’s. The chair came out of my Great Grandparents’ home – they were Irish immigrants. My Great Grandfather emigrated in 1887 by himself and in 1894 returned to Ireland and brought his mother over. We think they might have brought things with them at this time and maybe this chair was one of the items?

There are no identifying marks anywhere on the chair as to the maker and I am wondering if it might indeed actually be an Irish chair; made somewhere in Ireland. The family was from County Tyrone in the north. Could the design of the back be a typical or known Irish motif? Could the design identify it as Irish? Or does that design point somewhere else in Europe? Other than a few losses to the veneer (same as it was in 2001) the chair is probably original – it has never been tampered with as far as I know – I do not think it has ever been stripped or refinished at any time.

The appraisal or evaluation of this single chair at the time was really quite high and a complete surprise to us (wish we had it in writing!!).
Don’t know whether after all this time it is still worth what he said it was OR if you could actually realize that amount if you were to sell it, but I have always thought it would be nice to know the origins of it – whether or not it was an Irish chair and, if so, it might confirm our thoughts that our Irish family brought it with them when they came to Canada.

Any information would be greatly appreciated. THANKS