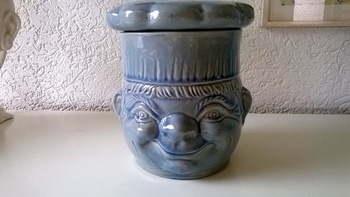 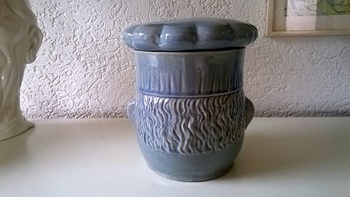 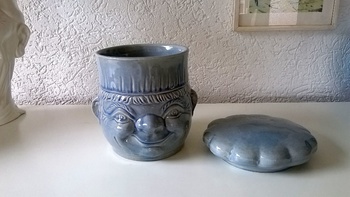 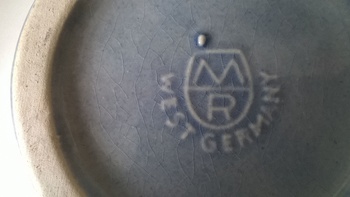 I found this cutie in one of my favorite thrift shops. There were two of them, but the other one had a wooden lid and was chipped.

Marzi & Remy.
The factory was founded in 1879, but was was first licenced on the 1st January 1880, by Anton Marzi & his brother in law Simon Peter Remy (b.29 6.1835 - d.24.1.1919). Gustav Thinwiebel joined from the beginning as a modeller. A pewter foundry was added in 1881. Initially they produced only blue-grey salt glazed stoneware, but in 1883 started to successfully produce cream stoneware, "Elfenbeinsteinzeug". About this time they were employing about a hundred workers, but in 1907 to 1910 saw a period of strikes and recession. In 1924, following the death of A.Marzi, his son in law, Johann Otto Bühler took over management and also the ownership of the company when S.P.Remy's son, Werner (b.16.11.1889) left the company in 1931. The company was not exempt from the recession of the 1930's and suffered greatly. J.O.Bühler's son Otto took over in 1941, followed by his grandson, Otto George Bühler in 1953. Under his management the old round ovens were replaced by tunnel ovens which replaced batch production with continuous production. During this time Marzi & Remy enjoyed being part of the "German economic miracle". However this was not to last and the company was sold to S.P.Gerz in 1994."