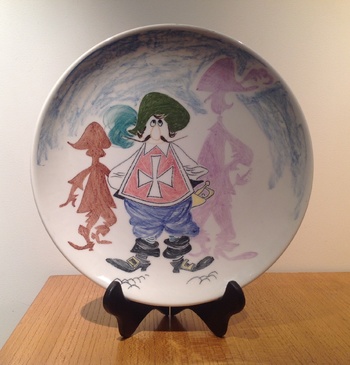 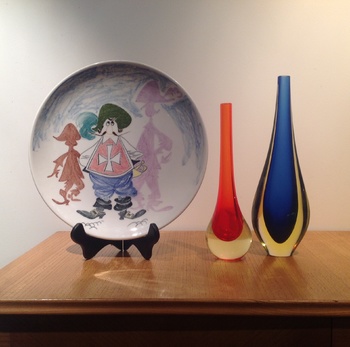 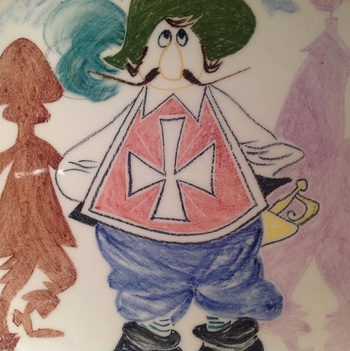 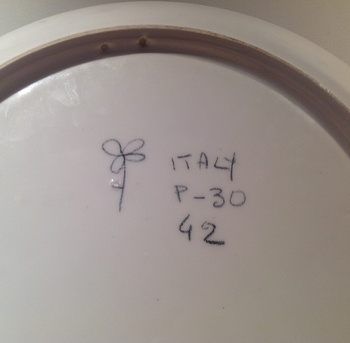 One of the great mysteries of Italian mid century pottery has been the work signed with a four leafed clover. At first the clover was seen as being a flower and so you will see references to 'the flower painter' on the net. One of the great champions of this pottery has been the dapper English TV personality, author, publisher, collector and dealer Mark Hill. He has a blog that gives an overview of his interests and activities - highly recommended reading for the Mid-Century collecting community.

A few months ago I came across this plate/charger at a Vinnies here in Sydney. I was quite taken with it because of the different subject matter - the three musketeers or were they pirates?

So I returned to Mark Hill's site to see what he had to say about 'the flower painter' aka 'il Quadrifoglio' (the Italian term for four leafed clover). And there was breaking news ! A few days beforehand he had announced on his blog: 'Alla Moda ‘Flower Painter’ – Designer’s Identity Revealed!'

But it is just a tease. The true identity of the Mysterious Flower Painter is yet to be fully revealed.

But he had been able to fill in a bit more information. There is even a picture of her being interviewed for an Italian women's magazine called Annabella (formerly Lei magazine). Mark Hill had been contacted by the daughter of the mystery painter : an Italian artist/academic Camilla Torna. Camilla told Hill that her mother was 'Milvia' - the name seen on some of the pottery Quadrifoglio designs. But not just on a series of pottery pieces !!! The name and similar figures of angelic stick figure women and men were found on a range of tea-towels and kitchen products produced from 1973 for a homewares company called Zucchi of Milan.

At this stage we know that Milvia was born in 1934.
She studied ceramics at the Istituto d’Arte in Florence.
She was influenced by a book called The Art of Living by Saul Steinberg.
Il Quadrifoglio was founded in an attic in Florence in 1955.
Milvia was the chief designer until around 1958.
Her colleague was called Simonetta, ‘Simmo’ for short.

Milvia products were sold exclusively by shop called Botto in Via Strozzi, Florence.

You can read the full story here: http://markhillpublishing.com/alla-moda-flower-painter-identity-revealed/

More will be revealed over time it seems.

On the back of this plate you can see the clover and ITALY, P30 and 42. The P is short for Piatto or Plate and the 30 is the size in centimetres. The 42 I believe refers to the design.