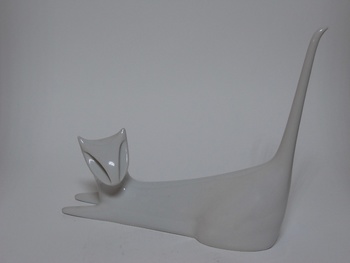 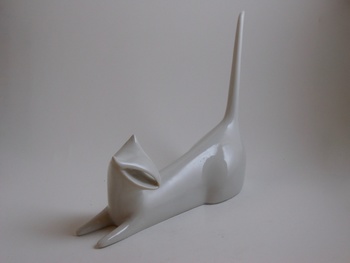 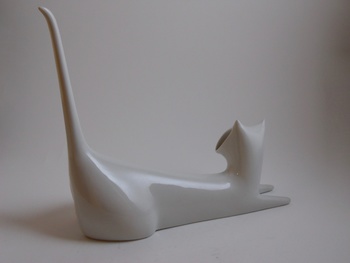 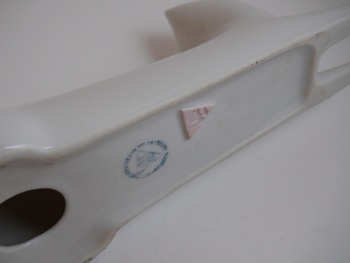 Good Morning CW Members----12:30 AM)2016-7-7
I found this nice piece of Bohemian porcelain today, made by Royal Dux Czechoslovakia, depicted a very stylish Cat.
The colour is immaculate white, amazing that the tail survive all those years, in perfect condition.

Duxer Porzellanmanufaktur, or Dux Porcelain Manufactory, was started in 1860 by Eduard Eichler in what was then Duchov, Bohemia. The high quality pottery and porcelain figures produced there are now generally referred to by the abbreviated name, "Royal Dux."

Ownership of the business changed frequently over the last 150 years. Bohemia became part of Czechoslovakia which was in turn controlled first by Germany then the Soviet Union. In 1990, even the national name was changed to Czech Republic.

The problem facing collectors is that many original 19th century molds have remained in production throughout the company's 150 year history. With vintage 19th century Royal Dux selling for up to several thousand dollars, modern pieces are often offered, either deliberately or through ignorance, as much older than they really are. In this article, we'll be looking at genuine marks found on authentic Royal Dux as well as typical forged marks you might find in the market.

Royal Dux products can be divided into four broad periods of production generally separated by wars and political upheaval: 1860 to WW I; 1919 to WW II; 1947 to 1990 and from 1990 to the present. From 1860 to WW II, ca. 1939, the company operated under the original name Duxer Porzellanmanufaktur, commonly called Royal Dux. After WW II, around 1946-47, the factory was nationalized by the Soviet Union and renamed Duchosvsky Porcelain. The company returned to private ownership with the collapse of the Soviet Union in 1990. Since 1990, molds and variations of company marks from earlier periods have continued to be used as Royal Dux continues production into the 21st century.

Royal Dux introduced one of the most distinctive marks ever placed on porcelain, a raised triangle of pink clay. All factory-applied pink triangles–whether from the 19th, 20th or 21st century–are made from a separate piece of pink clay. The pink clay is applied to the base of Royal Dux white clay bodies. The two separate pieces are fused together during firing. There is virtually never the slightest seam or gap between the pink clay of the triangle and the white clay of the piece to which the triangle is applied.

Before WW I, pink triangles were generally, but not always, left in a bisque, or unglazed, finish. Most Art Nouveau figures in matte glaze, for example, usually have bisque triangles. After WW I, Art Deco figures entirely glazed in a high gloss occasionally have glazed triangles. Pieces with gloss glazes after 1950, especially after 1980 are more likely to have some glaze on the triangle. Although bisque triangles are the general rule, there is considerable variation over the years.

Factory triangles are all roughly the same size, about one-half inch per side and raised about one-sixteenth inch thick, rarely more than one-eighth inch thick. Size varies slightly because some original triangles were slightly deformed when damp.

Appearing in all genuine factory-applied raised pink triangles, regardless of age, is "Royal Dux Bohemia." That lettering appears around an oval shape in the center of the triangle. A crosshatch, or grid-like pattern, is at the top of the oval. Even though the country of Bohemia disappeared at the end of WW I, Royal Dux Bohemia remains in the mark to this day.

Each of the four periods of production can be roughly identified by changes in marks. In the first period, 1860 to WW I, the letter E is impressed in the center of the pink triangle. E represents Eichler, the founder's surname (see line drawing and photo in Figs. 2-3). The letter in the center of triangles changes over the years. It's important to keep in mind that E is the earliest. A convenient way to remember this is by word association: E is for early. The great majority of authentic factory-applied triangles from the first production period are unglazed.

Following the end of WW I, Bohemia, the home of Royal Dux, was united with Slovakia and Moravia to form a new nation, Czechoslovakia. This change was reflected in the phrase "Made in Czechoslovakia" which appeared in Royal Dux marks around 1919 (Figs. 7-9). The letter E continued to be impressed in the center of the pink triangle and "Royal Dux Bohemia" impressed around the oval.

Made in Czechoslovakia can appear joined to other Royal Dux marks or can appear separately at a distance from other marks. Typical colors for stamped ink marks include green and a reddish-pink.

At the end of WW II, Russia, then the Soviet Union, continued to occupy east-European countries its troops held when Germany surrendered. This included Czechoslovakia. Russia nationalized almost all Czechoslovakian industries including Royal Dux. Around 1946-47, the factory was renamed Duchcovsky Porcelain after the regional name of Duchov.

The letter E is removed from the center of the pink triangle at this time and replaced by the letter D. Royal Dux Bohemia continues to appear around the oval. The triangle is still a separate piece of pink clay applied to a white clay body. Made in Czechoslovakia again appears in marks sometime in the early 1950s.

Some products made in the early 1950s have an M rather than a D in the pink triangle. Very few of these pieces have been seen in western markets. For all practical purposes, the letter D is the dominant letter in the vast majority of pink triangles since WW II.

The collapse of the Soviet Union in the early 1990s ushered in tremendous changes in eastern Europe. Royal Dux returned to private ownership and Czechoslovakia changed its name to Czech Republic. With all these changes, production since 1990 is by far the most difficult to accurately date by marks alone.

The most significant change was in the general policy regarding marks. Rather than going forward with totally new marks, the factory brought back marks used in the past. The letter inside the triangle–in both printed marks and the raised pink mark– continued to be the letter D. Printed marks begin to include not only "Made in Czech Republic" but also "Made in Czechoslovakia" previously used only on pre-WW II pieces. Pieces made since the mid-1990s in original molds and carrying the old-appearing marks can be difficult to separate from 19th and early 20th century originals.

Here are a few general guidelines that will help you identify most 1990s pieces. First, any piece marked with the modern copyright symbol, ©, or modern registered symbol, ® , are from the 1990s. Any piece marked Czech Republic cannot be older than 1990-1991 at most. Pieces with a gold foil label with a letter D in the center are also from the 1990s. Pieces marked Made in Czechoslovakia–made before or after 1990–can in no instance possibly date before 1919 at the earliest. Czechoslovakia was created at the end of WW I, ca. 1918-1919. Any piece with a D impressed in the pink triangle cannot date any earlier than the late 1940s.

However, neither "Made in Czechoslovakia" or a D impressed in the pink triangle, are guarantees of age. Both of those markings have been used in the 1990s and continue to be in use as of 2001. The new vase in Fig. 30, for example, is marked Made in Czechoslovakia but was made in 2001. There is a pink triangle with an impressed D on the frog in Fig. 23.

Another, but less objective, test is the quality of the finish. Most matte glazed pieces from before WW II, especially before 1900, are velvety smooth. Surfaces of pieces made after WW II tend to be rougher. This test only works on matte finished pieces, though, and you need to be familiar with originals. Neither is a test for pieces with gloss glazes.