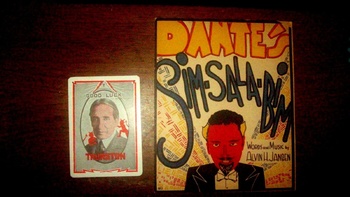 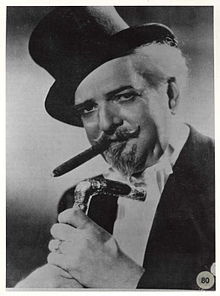 Thurston Center--Dante Right
THE TWO MAGICIANS WERE PARTNERS--READ BELOW
Thurston Luck Card 1930s, has his daughter;s pretty photo on back and says"Good Luck, She Takes After Her Dad"Howard Thurston (July 20, 1869 – April 13, 1936) was a stage magician from Columbus, Ohio, United States. His childhood was unhappy, and he ran away to join the circus, where his future partner Harry Kellar also performed. Thurston was deeply impressed after he attended magician Alexander Herrmann's magic show and was determined to equal his work. He eventually became the most famous magician of his time. Thurston's traveling magic show was the biggest one of all; it was so large that it needed eight train cars to transport his road show
He was born on October 3, 1883 in Copenhagen, Denmark.

Dante was known throughout the world under the name Dante the Magician, working in vaudeville, burlesque, legitimate theatre, films, and in later years, early television. Dante and his troupe, consisting of between 25 to 40 performers, made several global trips and appeared in many U.S. theaters.
His stage trademark was to utter three nonsense words, "Sim Sala Bim"
Sheet music from SIM SALA BIM, writen bt Dante (Jansan) was published in Prague, words & Music Czechoslowakia (spelled that way, on inside of the music.) Writen in that language so I can't read the words to you--It is a FOXTROTT ( yes that's how it is spelled). Copyright 1931--about 5 years before he died--art by Mostni .And some wild art it is!!