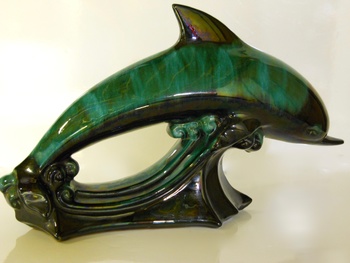 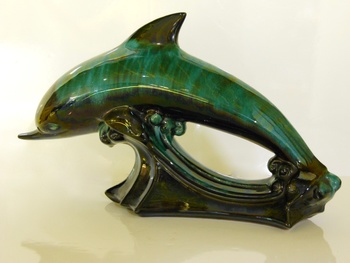 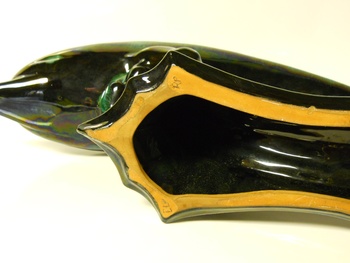 Good Morning CW Members---12:00 AM)2016-7-15
I have this Dolphin for quite a while, always love the look of Blue Mountain Pottery, the Green Glaze agains the black on Red clay, really make stand up any piece from them, lot of popularity with collector around the world, this Dolphin is not the rarest to find, but in good condition, could be not easy to find, this piece is so big, very easy the damage if not manipulated with care.

Blue Mountain Pottery was Canada's largest manufacturer of quality giftware pottery from its introduction in 1947 until the plant closed for good December 2004 ending a 57 year business.

Located in Collingwood, Ontario, the uniqueness of Blue Mountain Pottery is a combination of the rich red clay, used in the moulding of the items, and the special glazing used to create the various shades of colour called "Reflowing Decorating".

According to the information sheets, there are 2 different hand applied glazes, one light and one dark in colour. During the firing process the lighter glaze runs as it passes through the darker glaze. It is nearly impossible to have to two pieces identical because of this process making each piece unique in itself.

The most popular colouring of Blue Mountain Pottery has always been the green toned items, but over the years, particularly during the 1960's, other colours were introduced such as Harvest Gold, Mocca, Cobalt Blue, Pewter, Red, Brown, etc. The product line also expanded over the years from decor vases and figurines to include kitchen cannisters and servers to complete tea and coffee sets.

Blue Mountain Pottery was sold through qualified Distributors and Specialty Gift Stores across Canada. It was shipped around the world including Great Britian, Germany New Zealand and the U.S.A. Until recently they had an Internet web site that also has closed.

Collecting Blue Mountain Pottery is still popular by many and, as time goes on, will become much more difficult to find in perfect condition. It is important to be able to identify Blue Mountain Pottery from other look-a-likes. All pieces that had a closed base also had one of a variety of BMP mould marks. For items that had no base including most of the bird and animal items, they were sold with stickers or tags, many long since lost. However, a trained eye can always identify the quality workmanship, the special glazing and the specific moulds of Blue Mountain Pottery.