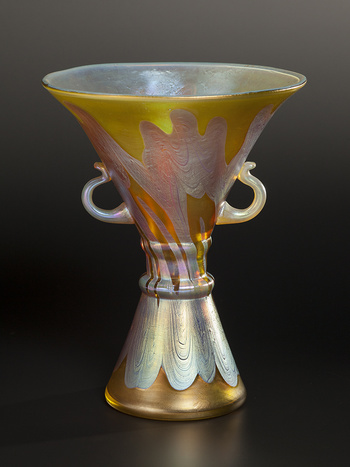 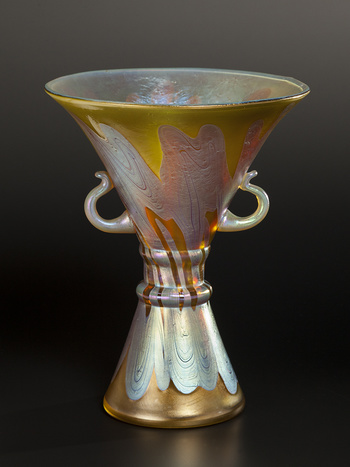 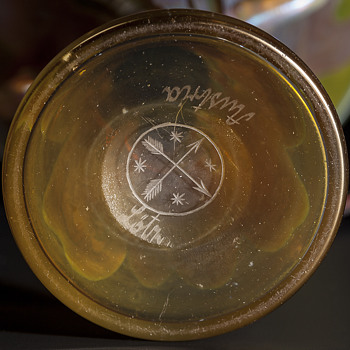 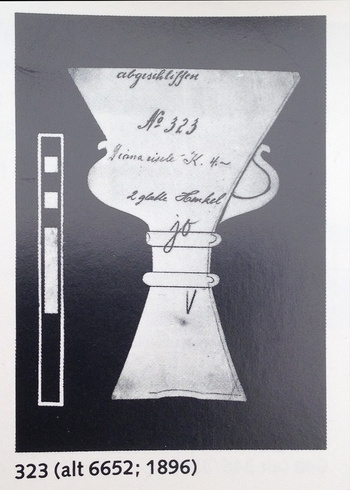 The speciality of this vase is revealed when examining the signature, engraved in the perfect polished pontil. The mark consist of von Spaun's circle mark with the crossed arrows and stars, "Lötz" written below this mark (within the pontil) and written "Austria", outside the pontil on the opposite side of the circle mark. As far as I know and learned from the literature, there is no other piece signed in exact the same way. Known are four versions: 1) the circle mark without wording, 2) the circle mark with "Lötz" (note the German umlaut), 3) the circle mark with "Austria" and 4) the circle mark with "Loetz" and Austria". Now we have to add a fifth variant: the circle mark with "Lötz" and "Austria".
All these marks are rare and may have applied to pieces only given or sold to museums and exclusive private collections. The marks date back to 1898 till 1900 with the exception of a collection given to the Klattau Museum in 1907 and a few private collectors (cf. Loetz Band I, Signatures). Presumably the circle mark was used first and "Austria" about two years later and in parallel in 1900. I believe that the vase was originally marked with "Lötz" and the Spaun circle while "Austria" was added at a later time by the Loetz factory. May be it was on display or just stored somewhere and finally signed with "Austria" when it was sold or given. I have to admit that this is speculative but it sounds plausible knowing that there are Loetz pieces given to museums years after their production.
The vase was originally designed in 1896 (production number 6652) and got a new number (323) in 1900. It shows the Phänomen decor Gre 7773 introduced in 1899 (not listed in the preserved pattern). 7 1/4 inches tall. Another piece of the same design is shown on loetz.com.