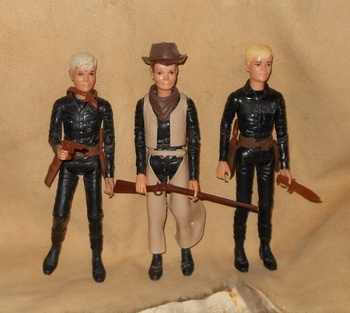 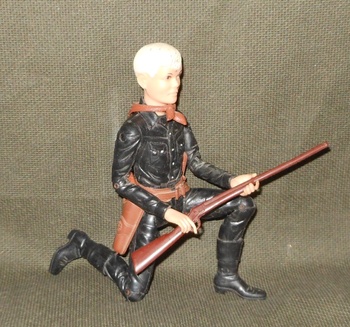 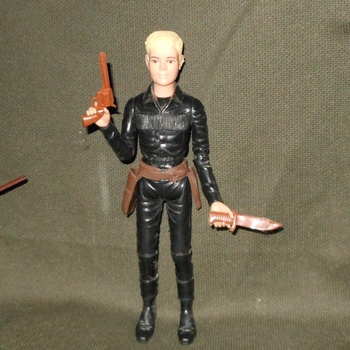 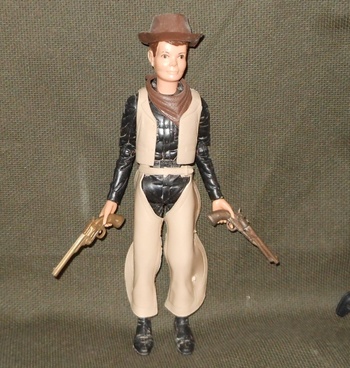 I believe it is 1974 when the Canadian Marx Company released their versions of the Johnny West line of figures in the new mod colors although it could have been earlier.. Jay and Jamie were released in in this sharp looking black color. Jay came with the ivory color accessories while Jamie had coral colored accessories. Unfortunately I do not have the coral colored pieces. I had started to collect some of the Canadian pieces but decided to just go with the US releases. No offense to Canada but one needs to know ones limitations. Although there are a few more unique foreign pies I would like to add such as Jimmy West and some UK pieces.
A point about the Canadian Jay and Jamie is that they came two body configurations. Originally Jay had the snap shirt torso and Jamie had the fringe shirt but with the Canadian versions. Many collectors like to have a Jay and Jamie with both bodies.
In photo two it is Jay with the original snap shirt torso and photo 3 is Jay with the fringe shirt which had originally came with the Jamie figure.
Photo #4 is Jamie with a snap shirt body. He is sporting a pair of pistols made by the late Noah Coop. He made many after market figures and accessories in the 2000s.