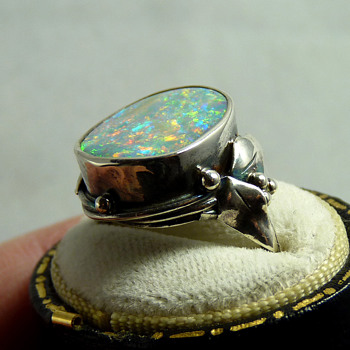 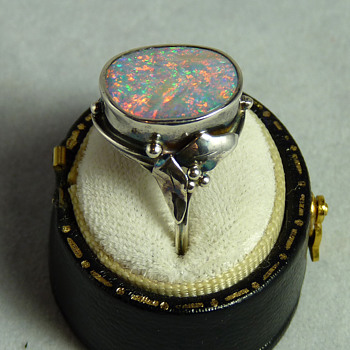 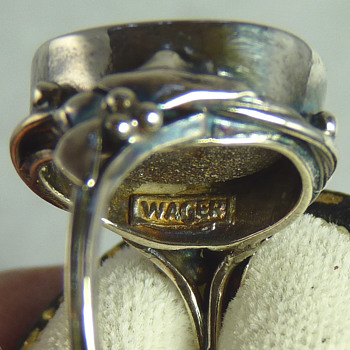 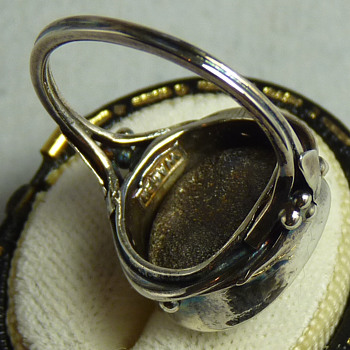 This silver Rhoda Wager ring is set with a 14 x 12mm Queensland boulder opal that shows some great colour shifts.

It's a rare example because it's signed with the little silver "WAGER" plaque under the bezel (disproving the statement in the Kellies article linked below saying Rhoda never signed her rings).

It's great to finally handle a signed Rhoda ring, and compare it with other attributed and "School of Rhoda Wager" pieces. The "tells" are all there in this Rhoda ring, like the double wire shank soldered to the bezel, the bubbled leaves, and the fine wire tracery of the vines.

However what I didn't realise is how well her pieces are made. The bezel is quite thick gauge silver, and the way the shank attaches makes it feel more solid and stronger than the "School of Rhoda Wager" pieces.

I've moved across the Bio info from one of my "School of" pieces, and the Kellies article below has more great background.

Rhoda Wager (1875-1953) came to Australia in 1918 from Britain via Fiji, and produced distinctive wirework Arts & Crafts jewellery in Sydney until retiring in 1946. Her niece Dorothy Judge, nee Wager (1912-2001), worked with Dorothy from 1928, and continued in the same style after Rhoda retired.

Rhoda studied at the famous Glasgow School of Art from 1897 to 1903, and exhibited jewellery at the Glasgow Art Club in 1901. She was a member of the Glasgow Society of Lady Artists, and showed regularly at their exhibitions. Rhoda continued her training in jewellery design and manufacture under Bernard Cuzner, and prior to departing England she conducted jewellery classes herself, including teaching Mary Thew.

Rhoda and Dorothy were prolific, and produced over 12,000 pieces during Rhoda's career. Their style became synonymous with Australian Arts & Crafts jewellery and was often copied by other local silversmiths.