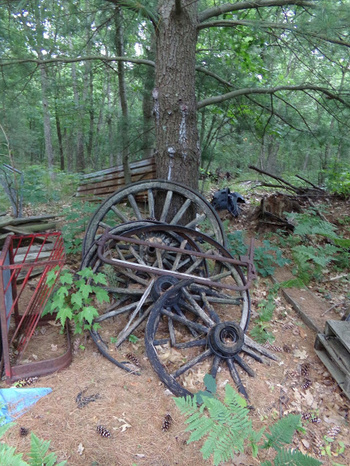 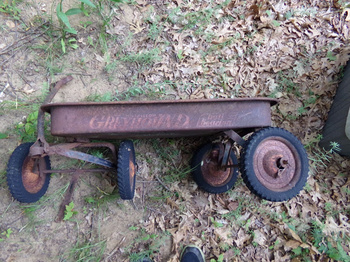 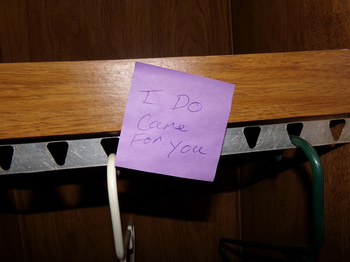 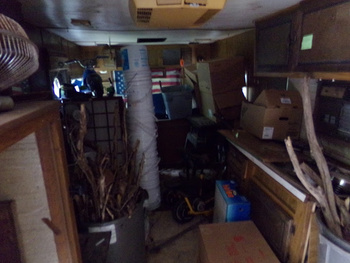 I'm an urban explorer but love the woods.

One day my niece and another person we were with decided to take our ride and leave me at the wrecked dead-end of a dirt road.

The scene was a grey day. Younger (under 50 years old) trees, mostly deciduous but also many coniferous, surrounded the area. Along the road, a few wild roses and bushes before the trees swallowed them up.

At the end of this road were two homes, one a 'lego' (pre-fab) home splitting in half, full of junk, and having all its windows smashed; and the other, which was a portable trailer, the kind trucks pull on trips.

I entered both after looking around, as they were long out of use and rotting away. I took nothing but photos in case they were owned, and then left (where I later stumbled across a small dump with a bottle and porcelain item of interest).

They were surrounded by broken-down cars and rotting wood/metal items, fridges, etc.

The junky pre-fab was dark. I found some bottles I dated to the 1990s, a very orange '70s fire-place thing, and much furniture piled up on each other along with many other items.

Across the dirt road from it was the trailer, which had a metal sign as the first part of the floor that had long ago begun rotting. The door swung wide and revealed a dark, deteriorating interior full of more junk.

I looked around, myself wary of wasps and such, and opened the closet.

Inside was this little note that touched me inside, as it must have a story of broken relationships and much hurt, yet also a story still with love and affection between the two partners who must have lived there till a few years ago (calendar dated 2012).

I don't know that story, for the only story about it that I can tell is that they both left, and that the trailer with a collapsing wall is full of junk as its last use was storage.

Whoever lived there liked Harley Davidson, was not well-off, and went to Wesco; there may also have been a child, judging by a plastic tricycle. I quickly left after that and cut through the woods (instead of taking that road to another road) and found the home where my niece had parked the cart she drove off with.