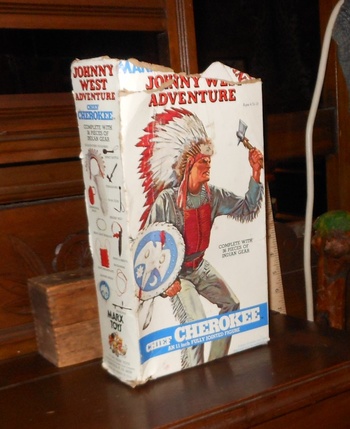 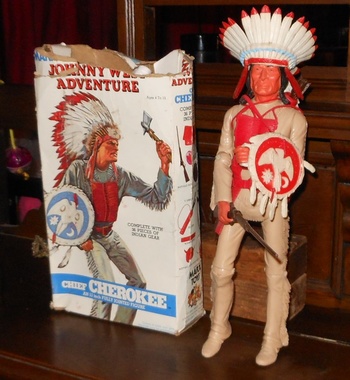 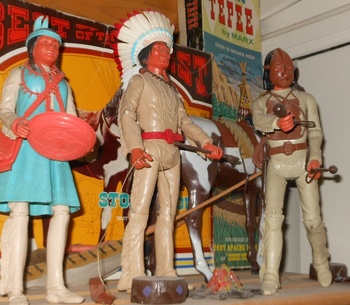 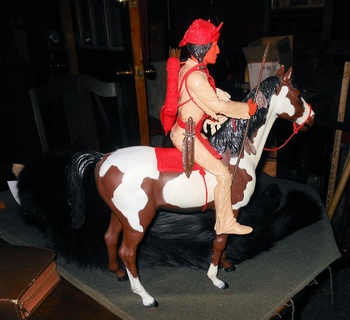 The Johnny West Adventure or JWA tends to be the most valuable of the Johnny West line. Chief Cherokee is one of the more affordable figures in this line. It is a good thing as the older figure with the caramel colored bodies are made from a blend of plastic that is not long lasting. One of my caramel Chiefs lost a leg while I was doing this photo shoot. The Chiefs in this light tan color are much more durable. You could probably run over this version in a car with no damage while the older ones will lose an arm or leg without being touched.
The boxes in this version were one piece and needed to be carefully opened to avoid damaging the box. Something a kid is unlikely to do. Thus the top of the box would be ripped open like this one. The box is also rather flimsy. I stuffed this one with packaging peanuts to help it keep its shape. The box does have excellent artwork..
A bonus is the multi colored headdress and shield. Before this figure they were molded in a brown color without being painted.
The other soft plastic accessories were molded in red and the hard plastic in dark brown. The dark brown was the same color as the original series.
The Indians also came with three pieces of horse tack which were the blanket, cinch rope and hackamore. The hackamore was the reins for the Indian horses. It looks like a bit of string and tends to be missing so it is on the valuable side. That and the red ermine tails seen on the sides of the headdress in photo #2.
The JWA series was sold from 1975 -1977.