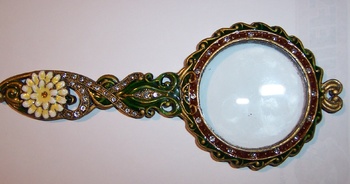 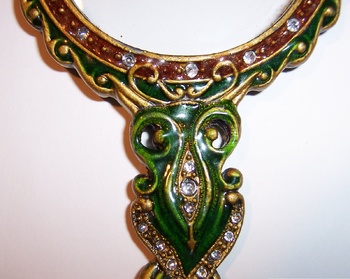 This item belongs to a friend of mine, and i just had to share. He told me it was passed down from his great great grandmother that was from Italy. My friends age is 55. He didn't know a lot about the origin of this or when it could have been made. It has inlaid gems on both sides. Each with its own mount. They are all slightly different but have the same style cut. No scratches on any of them. They could be diamonds but i am not sure. The powdered gold or whatever powdered metal it could be, looks like it went on first after the two sided were joined together over the glass. The seam can be seen in the side view picture. Then the enamel in different colors. It is a heavy piece, and is not magnetic. Has a gunmetal color where the gold has worn away on spots. When i looked through the lens, the clarity was so clear. You can be about a foot away from on object before its out of focus. It is 8 and a half inches in length. There is a crest on the top, and the mid section has an arrow going through the three diamond eye. Also the flower with a yellowish stone at the bottom. It dose not have a maker mark that i can see. Someone who was familiar with the designs and style would maybe know. With the research i have done i'm still not sure. As far as a year it was made, late Victorian? Maybe the number of diamonds has a relation to the year. It's just awesome and i have looked and looked online for something similar to it, and the closest thing was a black and white photo of a magnifier encrusted with diamond, and below the picture it said that it was a King Louis design. If anyone knows any more about it, I'm excited to know. Thanks 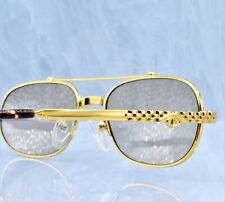 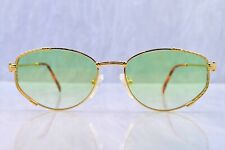