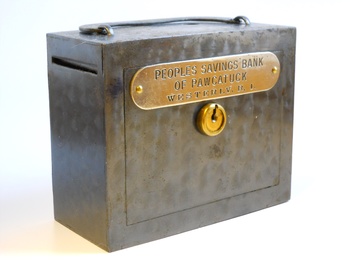 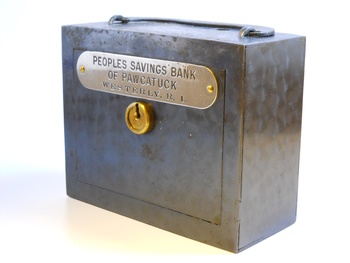 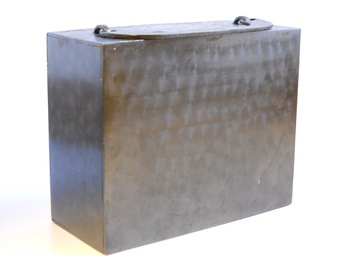 Good Morning CW Members--- 5:00 AM)2016-8-6
When you can add in your collection, several promotional Bank from the same city & State, it's always very interested to do.
This is exactly what happen many, many years ago, after i found the first from Westerly,Rhode Island, I found this one from a little town in Westerly, promoted by" The Peoples Saving Bank Of Pawcatuck" also made by "The Lodi Steel Box Maker, Lodi, Ohio.
I add a third picture from the back of the Bank to show the particular decor process use by Lodi Steel Box Maker to treated the steel , very particular to this Maker.

Pawtucket city in Providence County, northeast of Providence at Pawtucket Falls. Incorporated in 1862.

Seeing the discussion about Pawcatuck and Pawtucket inspired me to complicate things further by adding Pawtuxet.

As someone has already said, Pawcatuck is in Connecticut, just over the line from Westerly, R.I. There was a long-standing boundary dispute between Rhode Island and Connecticut concerning all of the land in southern R.I.--just about all of what is now Washington County. There are lots of records of Rhode Islanders being thrown in jail in Connecticut for encroaching on what Conn. considered theirs, as Conn. at one time claimed all the land up to Narragansett Bay. Eventually, the line was established as the Pawcatuck River, separating Westerly and Pawcatuck. There was a lot of moving back and forth across the R.I./Conn. boundary, so the same family is often found in both states.

Pawtucket is in the extreme northeast. The part of the modern Pawtucket that is east of the Seekonk River was originally part of Rehoboth, in Plymouth Colony. Rehoboth was constantly being split up and recombined, and is a real mess. In 1862 that part of Pawtucket was ceded to R.I. In 1874, the part of Pawtucket to the west of the river was taken from North Providence, which had been set off from Providence in 1765.

Pawtuxet is a village at the mouth of the Pawtuxet River, and is in the present cities of Cranston and Warwick. The original Pawtuxet settlement was a part of Providence, but the settlers were a contentious lot, and for some years actually placed themselves under the protection of the Massachusetts Bay Colony. Fairly early, the line between Warwick and Providence was established as the Pawtuxet River, so the southern part of the village of Pawtuxet became a part of Warwick. The part north of the river was a part of Providence until Cranston was split off in 1754.