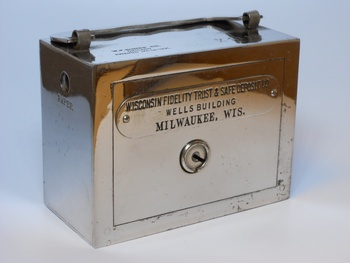 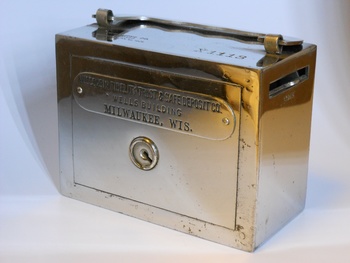 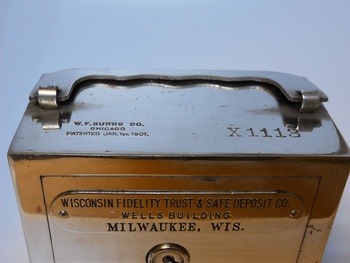 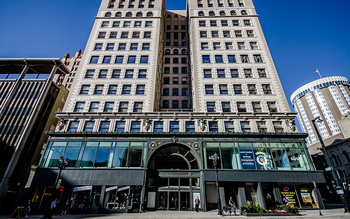 Good Evening CW Members--- 10:00 pM)2016-8-8
I want to share with you another promotional steel bank, this time in immaculate and in mint condition chrome electroplate finish, this one was manufactured by W.F.Burns Company, Chicago, Patented 1 January 1901, serial number X1118.
After all those years collecting this maker, i have only 2 in this pristine condition.

The first recorded inhabitants of the Milwaukee area are the Menominee, Fox, Mascouten, Sauk, Potawatomi, Ojibwe (all Algic/Algonquian peoples) and Ho-Chunk (Winnebago) (a Siouan people) Native American tribes. Many of these people had lived around Green Bay before migrating to the Milwaukee area around the time of European contact.

French missionaries and traders first passed through the area in the late 17th and 18th centuries. French explorer, Robert La Salle was most likely the first white man to visit Milwaukee in October 1679.Although La Salle and others visited Milwaukee, prior to the 19th century, Milwaukee was mostly inhabited by American Indians.

The American Indians at Milwaukee tried to control their destiny by participating in all the major wars on the American continent. During the French and Indian War, a group of "Ojibwas and Pottawattamies from the far [Lake] Michigan" (i.e., the area from Milwaukee to Green Bay) joined the French-Canadian Daniel Liénard de Beaujeu at the Battle of the Monongahela.In the American Revolutionary War, the Indians around Milwaukee were some of the few Indians who remained loyal to the American cause throughout the Revolution.

As the 18th century came to a close, the first recorded white fur trader settled in Milwaukee. This was French Canadian Jean Baptiste Mirandeau who along with Jacques Vieau of La Baye (Green Bay), established a fur-trading post near the Menomonee River in 1795. Mirandeau remained all year with Vieau coming every spring with supplies. In 1820 or 1821 Mirandeau died and was the first white to be buried in the city in an Indian cemetery near Broadway and Wisconsin. The post was on the Chicago-Green Bay trail, located on the site of today's Mitchell Park. Vieau married the granddaughter of an Indian chief and had at least twelve children. Vieau's daughter by another woman, Josette, would later marry Solomon Juneau. These links established a Metis population, and by 1820 Milwaukee was essentially a Metis settlement.

The Fidelity Trust Company, whose quarters are in the Wells
Building, 120 Wisconsin street, was organized in 1901 with a capi-
tal stock of $250,000. The president in May, 1908, was Howard
Greene, and the secretary was J. G. Hickcox.

The building has a long history as a communications hub.

The Wells Building is named for its first owner, Daniel Wells, who arrived in Milwaukee from Maine in 1835, buying land from Solomon Juneau, one of the city's founders. Wells became rich buying and selling timber, and through other endeavors, while serving two terms in Congress.

Wells died in 1902 at age 93, just as the building was being finished. The Wells estate sold the building in 1970 to Towne Realty, which over 40 years later sold it to AH Wells LLC, formed by Nordeen and Prescott.

Telegram carrier Western Union, then the nation's dominant long-distance communications provider, based its Milwaukee operations at the Wells Building starting in 1918, according to city directories filed at the Milwaukee County Historical Society.

The telegraph lines that converged at the Wells Building's Western Union operation created a communications hub, Nordeen said. The building's sub-basement still has some of the old copper lines, he said.

"If you needed to send a telegram to Milwaukee, it went through the Wells Building," Nordeen said.

The telegraph lines, connecting Milwaukee to other cities, typically followed the right of ways created by railroad tracks, he said.

And the network of telegraph lines paved the way for the next form of long-distance communication: telephone lines.

It's not a coincidence that Wisconsin Telephone Co., now part of AT&T, established its headquarters at 722-740 N. Broadway, just northwest of the Wells Building, Nordeen said.

By the late 1990s, investments in fiber optic lines to carry voice, data and video were growing at a faster rate. They followed the same paths taken earlier by the railroad, telegraph and telephone lines.

The Wells Building found itself in demand as a place for voice and data carriers to connect — creating the carrier hotel around 15 years ago. Other Milwaukee buildings landed similar tenants, but the burst of the dot-com bubble hurt some of those operations.

Now, with the continuing increase of cloud computing, Nordeen and his partners believe the timing is right to invest in drawing more Internet-based businesses to the Wells Building.

"It's certainly a different world today from what it was 15 years ago," he said. "I can't imagine it reversing." 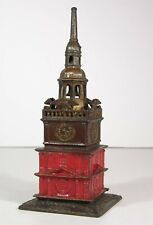 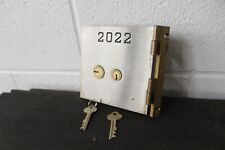 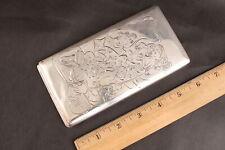 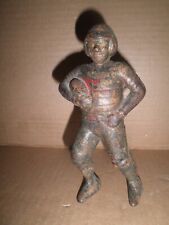