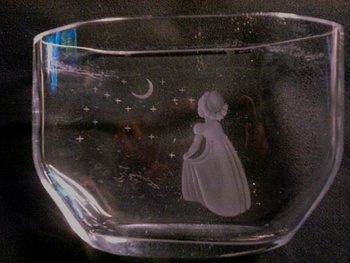 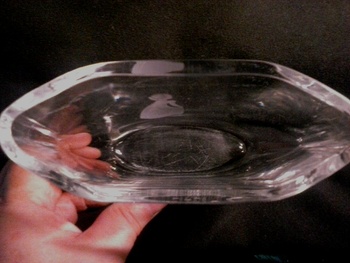 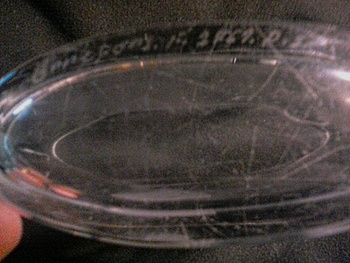 It's been a very blase' Summer at the thrifts which is typical but every once and a while something interesting pops up. I found this nice little Orrefors pocket vase at Volunteer's of America this morning. "Wish to the Moon" shows a young girl on one side gazing at the moon and stars which is engraved on the other side of the vase creating a 3D effect. It's signed on the bottom with the usual info. These may have been reissued in the 60's as well and done by other designers based on Edvin Ohrstroms original design. I think this one might be older judging by the heavily scratched bottom but I can't make out the designers initials as they kind of trail off around the edge. It's not in the best of shape though. Some bad scratches on the moon side and a tiny flea bite to the inside of the rim. Hard water stains show where a water line had been. Probably could be polished up but not bad for their odd price of a dollar ninety one cents. -Mike-