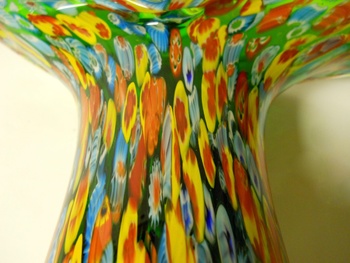 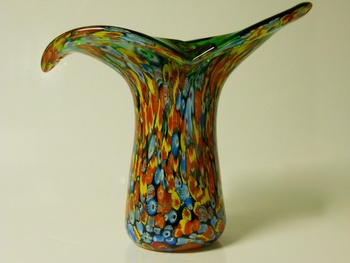 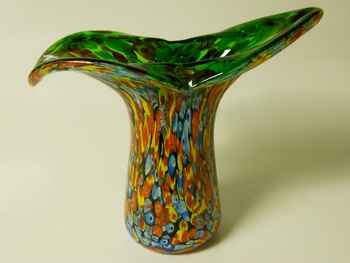 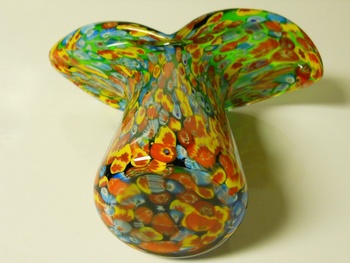 Good Evening CW Members--- 10:00 PM)2016-8-16
At my second visit today at the Salvation Army, i was patient end off to wait util a cart of products finally show up, and this pay off again, I see this one coming from far away, this beautiful and colourful vase was an easy target, at first when i see it and still on the cart from few feet from me i am thinking of Bohemian spatter glass, but when i grab it, i realize this was a Murano Millefiori Glass, no acid signature and no label, no doubt in my mind about who make this very colourful vase.

Green inner layer glass, murine, with multicolored patterns for second layer and clear glass throughout the exterior vase, heavy, well done and lot of wear at the base, from the 60s

Many thanks Everyone for Viewing.
Alan

Millefiori (Italian: [mille?fjo?ri]) is a glasswork technique which produces distinctive decorative patterns on glassware. The term millefiori is a combination of the Italian words "mille" (thousand) and "fiori" (flowers). Apsley Pellatt in his book Curiosities of Glass Making was the first to use the term "millefiori", which appeared in the Oxford English Dictionary in 1849. The beads were before then called mosaic beads. While the use of this technique long precedes the term "millefiori", it is now most frequently associated with Venetian glassware.

More recently, the millefiori technique has been applied to polymer clay and other materials. As the polymer clay is quite pliable and does not need to be heated and reheated to fuse it, it is a much easier medium in which to produce millefiori patterns than glass.

Roman era millefiori style cup from Emona (present Ljubljana) grave.
The manufacture of mosaic beads can be traced to Ancient Roman, Phoenician and Alexandrian times. Canes, probably made in Italy, have been found as far away as 8th century archaeological sites in Ireland, and a piece of millefiori was found, along with unworked garnets, in a purse at the early 7th century Anglo-Saxon burial site at Sutton Hoo.

The technical knowledge for creating millefiori was lost by the eighteenth century, and the technique was not revived until the nineteenth century. Within several years of the technique's rediscovery, factories in Italy, France and England were manufacturing millefiori canes. They were often incorporated into fine glass art paperweights.

Until the 15th century, Murano glass makers were only producing drawn Rosetta beads made from molded Rosetta canes. Rosetta beads are made by the layering of a variable number of layers of glass of various colors in a mold, and by pulling the soft glass from both ends until the cane has reached the desired thickness. It is then cut into short segments for further processing.

The millefiori technique involves the production of glass canes or rods, known as murrine, with multicolored patterns which are viewable only from the cut ends of the cane. A murrine rod is heated in a furnace and pulled until thin while still maintaining the cross section's design. It is then cut into beads or discs when cooled. 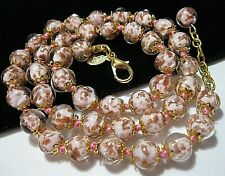 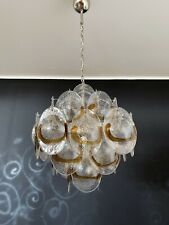 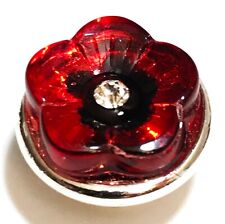