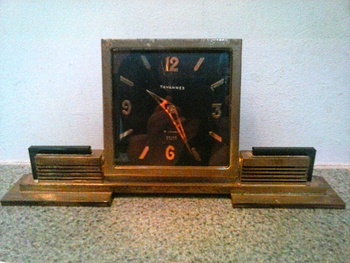 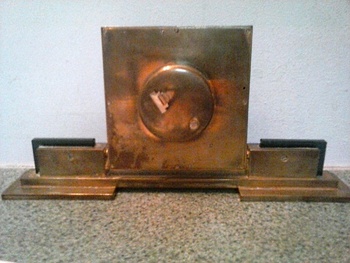 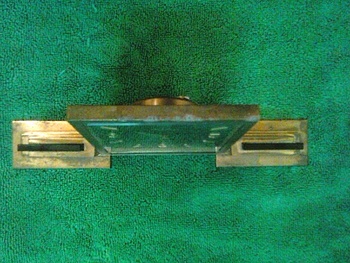 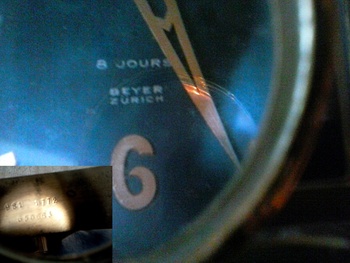 My friend at the antique shop had been wanting a small portable record player and had not found one herself. So I came across a vintage 1950's Westinghouse suitcase model. It has a red and white leatherette case with a white plastic handle and gold metal suitcase latches. Not state of the art audio by any means but with a new needle it works great. To my surprise it has a tube amp with one little tube that needs to warm up before you get any sound..amazing it still works after 50 plus years ! Now on to the clock. This was in her booth so we worked a trade deal for the record player along with a bit of cash. It has a wonderful "Deco" design with onyx or glass accents at each end. This piece is incredibly heavy brass for it's 10"L x 5" H size and super slim. The tilting clock face is a mere 1/4" thick but the wind-up movement sticks out about and 1" or so. Unfortunately it's not running. I'm tempted to tinker with it because the whole clock it held together with brass screws. A bit of clock oil may get it going again. Tavanness is known for it's wrist watches but I could not find anything about this clock. The face says 8 "jour" so I guess it runs 8 days on one winding. It's a bit green and tarnished but would probably clean up very nicely.-Mike-

NOTE: 9/4/2016
Since posting this I've found that the clock does indeed run. I picked it up one day and was about to open it and clean it. I noticed that I was able to wind it. Prior to that it was tightly wound, so it had started running on it's own for some strange reason. My theory is it was really humid at the shop and maybe the drier air from the A/C at home may have helped. It seems to like being more vertical and not tilted too much on the base. It did run a full week or so on one winding as stated on the dial (8 jour). It looses a few minutes an hour or so though out the day but it does run so I'm not complaining at all . I just keep adjusting it when ever I think about it. -Mike-