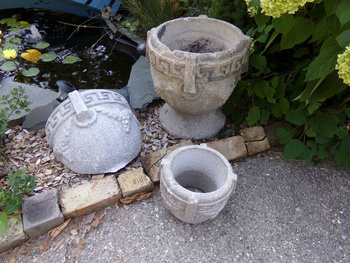 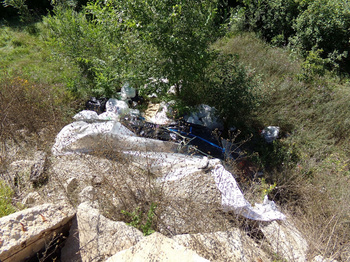 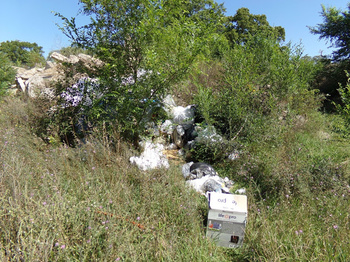 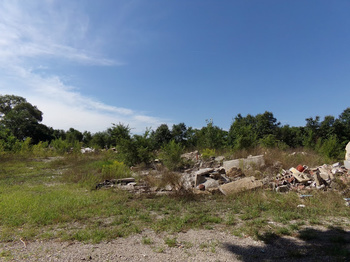 That occurred yesterday. Late this morning I came back to Wesley's home by the cemetery and dropped off a box of stuff for him. Because he is practically toothless, I gave him soft-foods. Because there is no refrigeration, I mostly gave him canned goods. Because I don't know if he has a can-opener, all but the beans were pull-tops. Mostly I gave him fruit, something I'd guess he lacks the most of.
In the box was also a real hat (from my work he seemed so interested in as he'd never been there), work gloves, books to read, magazines as he wanted to keep up with the World, a Bible just in case he lacked one, the C-cell batteries he needed, some double-A batteries, an envelope with a Forever stamp on it (of a purple heart, as that's what I had, which is interesting as he's a veteran) for when he needs to mail something important, Gatorade, matches, a roll of paper towel, a notebook and pen, a sheet I hand-typed out 3 hymns and a dozen Bible verses on for my own inspiration earlier this year, and a letter front and back (I know he can read as he read me an excerpt from a newspaper).
The box, seen in photo three, was so full it burst.

I think he was asleep in his shelter, so I left it there, went back to my car (which I had this time hid behind debris, in the shade, locked up) for my camera, and took pictures to make this story come to life.

Photo one is how I'm gonna get away with posting all of this. The cemetery near by tossed out broken pottery. I found one intact and took the others for accents in the garden, and maybe the big shard for the fish to hide in.

I titled this piece after a song by Demon Hunter. But instead of having a heart full of the death he lives by, Wesley has a heart of hope-- that he can still get his house back 5 years later, and that God will continue to provide for him.

Outside of a graveyard I found a 70-year-old in a horrible situation, but he still had more hope than a lot of people I've met. Most people wouldn't see a homeless old man as a source of inspiration, but he is inspiring. He didn't complain about things-- not even our West Michigan winters, which he called "not so bad" in general, except for a few days.

Photo one is of what I brought back.
Photo two is of where I stood atop the slab, and where Wesley stood below (first in the tree, then in front of it).
Photo three is a view of his current 'house'.
Final photo is view from near my car of Wesley's place, back left.