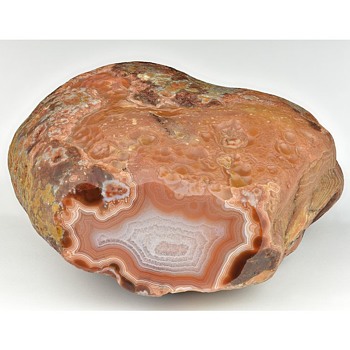 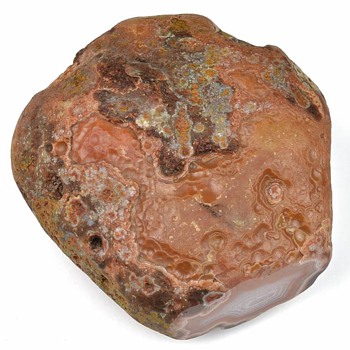 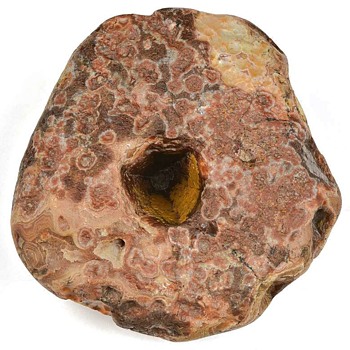 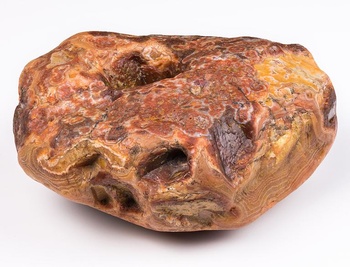 Confession time: I’ve always loved fossils, minerals, crystals, and agates. Heck, as kids my older brother and I owned lapidary equipment. Anyhow, the lapidary stuff is long gone but today we (actually my wife) have a rather large collection of Lake Superior agates. My wife is the primary collector; she likes polished specimens that show impeccable banding. I prefer roughs and only have a couple examples, but this particular specimen is very special.

The first two pictures show what a typical “laker” looks like in its original state. Hardcore Lake Superior agate collectors prefer to keep these with the 'husks' as found. Classic banding appears in parts of the husk giving a hint of what is inside. A window was cut and polished in one end showing beautifully formed banding with an outer reddish hue from the presence of iron.

So ... why not completely slice or polish this specimen?

Well ... because it has a rarely seen feature (third picture).

Take a close look. The tapering impression is about 1” wide by 2” deep, which is practically the entire depth of the stone. The incredibly preserved six-sided cavity is from a dogtooth calcite spar. In other words, this agate slowly formed over a single large crystal! It’s simply amazing that the stone still created beautiful banding.

The opposite side of the stone (fourth picture) has further surprises; six lesser impressions from smaller calcite crystals which must have clustered around the single large spear.