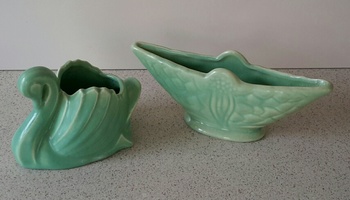 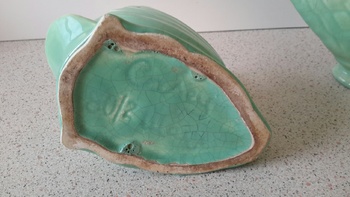 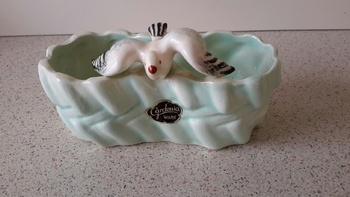 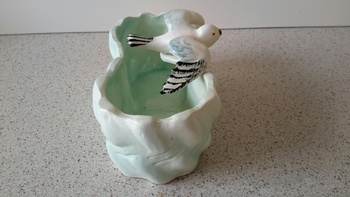 Just some of the smaller pieces of Australian pottery to show you, collected over the years.

The first two green ones are Casey Ware:

According to Geoff Fords Book - Encyclopedia of Australian Potters Marks 2nd Edition, Casey Ware was established in 1945 in Croydon Sydney NSW by a Mr Kirkwood and Ronald Cooper under the company name K.C. Industries Pty Ltd. This book says that the impressed stamp was used from late 1940's - mid 1960's and that the foil label was used from mid 1950's - mid 1960's.

The second two pictures show a lovely little trough type vase with a seagull perched on the edge.

There is the original foil label for "Gardenia Ware" still attached. I am pretty sure that this label was associated with one of the bigger potteries, Diana or Pates perhaps......

I like them!! and they don't take up too much room!
Hope you enjoy seeing them. Thanks, Judy

UPDATE: Gardenia Ware identified with thanks to Vetraio!