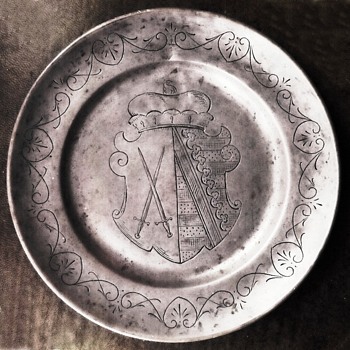 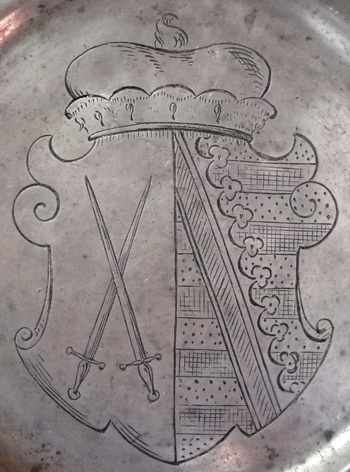 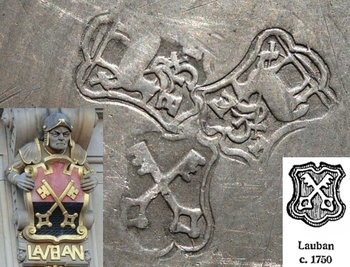 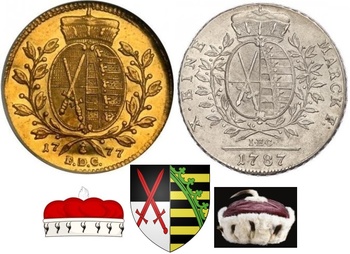 The plate was made in Lauban (Luban, now in Poland), The Electorate of Saxony (German: Kurfuerstentum Sachsen, also Kursachsen), The mark was identified in the book Schlesische Zinngiesserwerkstaetten (Pewter workshops in Silesia) by Erwin Hintze, Breslau 1909. Three mark system was legal in Saxony (town or maker`s mark repeated).
Engraved with coat of arms of The Elector of Saxony and Arch-Marshal of the Holy Roman Empire. Electoral hat was made of velvet and ermine.
(Image 4: coat of arms on 18th century Saxony coins, electoral hat).
The engraver was familiar with hatchings (systematic patterns of lines and dots used for designating heraldic colors; black and gold with lines being in opposite direction for green, as seen in older heraldry).

The Golden Bull of 1356 raised the duke of Saxe-Wittenberg to the hereditary rank of elector, i.e., member of the college that elected the Holy Roman Emperor. Upon the extinction of the House of Ascania, it was enfeoffed to the Margraves of Meissen from the Wettin dynasty. The dignity of Elector carried great prestige and was considered to be second only to that of King or Emperor. The Electors had exclusive privileges that were not shared with the other princes of the Empire. The Wettin electors raised Saxony to a kingdom in 1806.
In the late 19th century pewter came back into fashion, replicas were created for decoration and old pewter engraved. This plate could have been engraved later, too. I could not find any reference in regard of 18th century armorial pewter. The fact is the plate was made c. 1750 in Saxony and has coat of arms of Saxony Electorate, either contemporary (engraved at the time) or not, but most probably a decorative piece without any link to Wettin family. Wishful thinking is not a method of judgment.