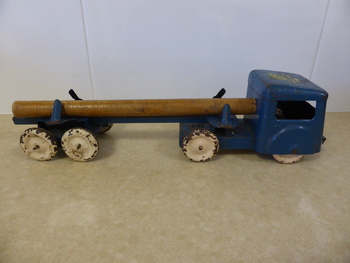 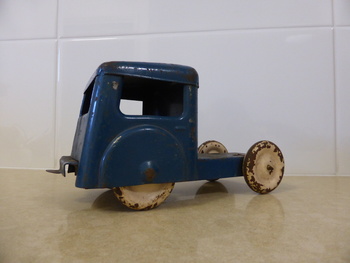 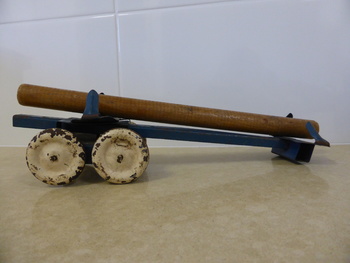 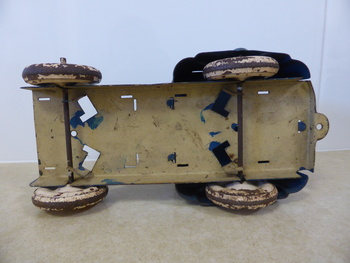 Hello, I was given this log hauler as a child of the seventies, hence the restoration paint job & sticker on the roof. The truck & trailer are made out of pressed tin which carries logs. The Truck & trailer are about 45cm long x 10cm wide. It has pressed tin wheels & the trailer axles can be moved forward or back depending on load! It is a bit of a puzzle in what make it is & what year of manufacture. It has no markings that I can see. My Dad tells me it was his when he was 4-5 years old(he was born in 1936) which would make it late 30's early 40's. The type of wheels would support this story, but to me the design & shape don't seem to match the era. To me it's more late 50's early 60's. He says he has a photo with it as a child, but I'm yet to see it.
Not sure if it had a grille or not? Don't know how it would have been attached? The truck chassis with it's pressed holes look like it would have been used for other models. I have been searching for awhile to find who the manufacturer was, it looks like a "Triang" but their wheels are different.(unless they have been changed as some stage?) I did just recently find in one of my Grandfathers old tool boxes a pressed steel wheel that looks very similar. I haven't been able to find anything the same on the intranet, anything 30's/40's doesn't seem to have a "Cab Over" design to it. If anyone can give me some clues it would be much appreciated. Cheers.