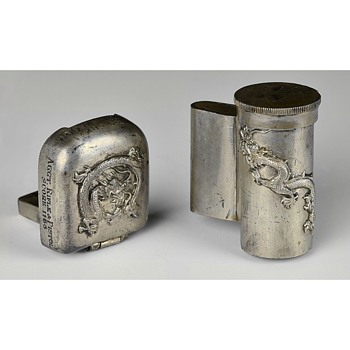 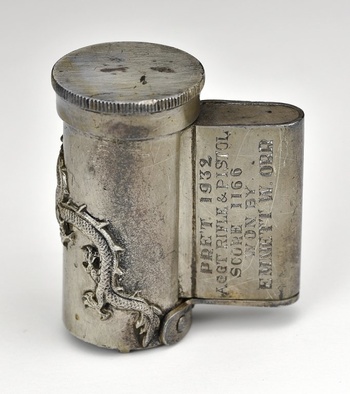 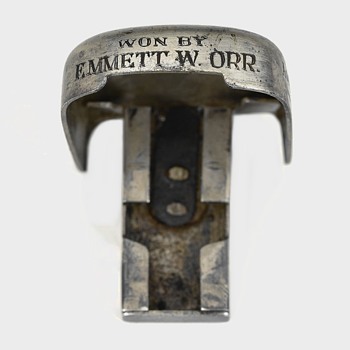 I’ve mentioned in previous posts that my oldest was an active U.S.M.C. Marine in a sniper scout platoon (Sgt.). Since returning home a couple years ago, and while now completing an MBA, he spends a great deal of time collecting, researching, and documenting Vietnam era U.S.M.C. combat equipment.

Earlier this year he called and was extremely excited about a new acquisition; a small shooting award with a terrific background. Over a series of phone calls and e-mails, I slowly learned the story of this very special pair of sterling silver (.935) presentation sight covers for a Springfield M1903 rifle. When all was said and done, I felt honored in handling and photographing the award.

Artful items appear in unexpected ways, and it was surprising for me to learn that these nicely crafted sight covers were from a 1932 U.S.M.C. shooting competition in Peking, China. They were won by Gunner Emmett Orr after competing in a combined rifle / pistol match. These small regional competitions and their awards, although not at the level or prestige of today’s Superbowl and World Series, were powerfully meaningful to those who, at the time, were actively deployed and possibly seeing combat.

Gunner Orr was stationed in China in the 1930's while with the 4th Marine Regiment (also known as the China Marines while stationed in Shanghai). He was described as an “Old China Hand and Distinguished Marksmen” who served with and had a special relationship with General Puller while in Guadalcanal and then at Marine Corps Base Camp Lejeune.

The presentation sight covers shown here are the actual awards shown in the book series about Marine Corps Scout Snipers called “Death from Afar” by Lt. Col. N. A. Chandler, U.S.M.C. (retired) and Roy F. Chandler, MSgt. U.S. Army (retired). Evidently, local shooting matches were not that unusual: “Where there are Marines, there will be firing ranges.”

The awards are marked ‘sterling’ .935 and adorned with Chinese dragons. The cylindrical shaped cover is for the front site while its mate is for the rear. The dragons have nice detail and appear to be braised to the base metal. Gunner Orr’s name, aggregate shooting total of 1166, and competition year (1932) are engraved on the sight covers.

BTW ... my son was also with the 4th Marine Regiment.