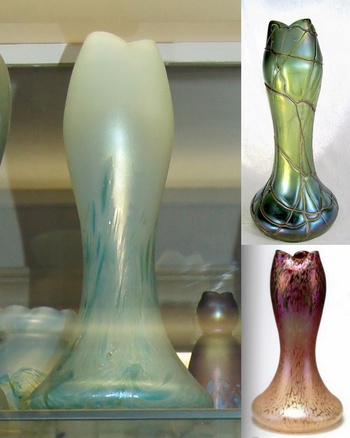 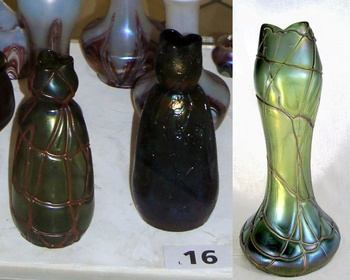 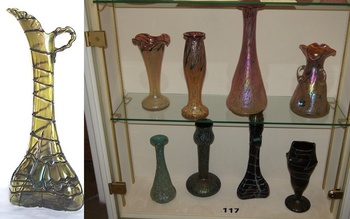 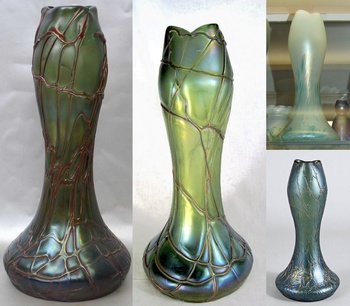 I love studying the colors and shapes produced by the various Bohemian glass companies during the Art Nouveau period. While Loetz is my area of expertise, I have also acquired several examples produced by Kralik, Rindskopf, Poshinger and PK. While archival documentation is limited for the other Bohemian glass companies, we do have access to much information that we can study. In addition to the many books published on the subject, the Passau Glass Museum offers a wealth of wonderful information for the collector that wants to study this glass. I have spent many days photographing the glass in the cases at the PGM. Take PGM Poshinger case #16 for example. On the top shelf we have a vase that is identical in size and shape to the one that was posted by Al the other day. (see 1st photo). Notice that the PK example sold by Quittenbaum that was also posted is slightly different in shape from the two Poshinger examples. Next we have two known Poshinger shapes located on the bottom shelf of PGM case #16, one of which exhibits the same ground color and red veining as Al's new vase. Finally, if we still wonder whether other Bohemian glass companies could have produced vases with a green ground & red veins, then all we have to do is look at the bottom shelf of the PGM's "PK" case #117. There we can see a vase that is identical in shape and decor to the last photo that was posted by Al. BUT if you look closely the ground color and veining of the PK example is slightly different in color from the Poshinger examples. Thanks to the PGM and their willingness to let collectors take photos of their collection, we can compare known decors and shapes produced by the various Bohemian glass companies and compare them to examples that we may later acquire. I have added a photo to this discussion to show how a study of both shape AND decor can help to identify and document a particular glass house's production. Here we have two green w red veined examples (the light saturation in the photo of the 2nd piece makes it difficult to see the red veins) produced in the same shape, a crackle example along with a known Posheringer decor in white with blue frit all in the same shape. Even though we know that Poshinger as well as other Bohemian glass houses produced examples in each of these decors, only by seeing the white vase with the blue frit which is a known Posheringer decor in the same shape as the others can we document the green & red veined vases as clearly being produced by Poshinger.