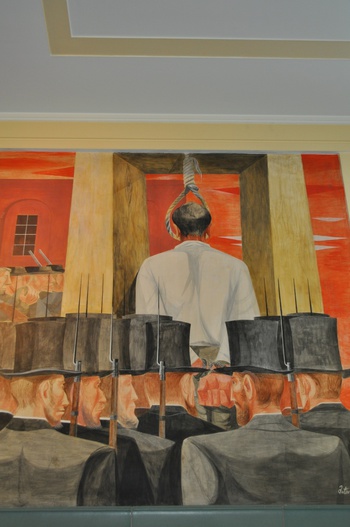 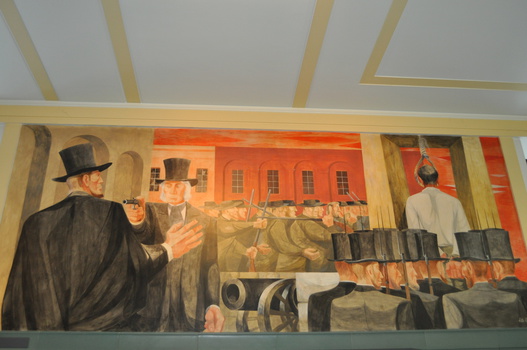 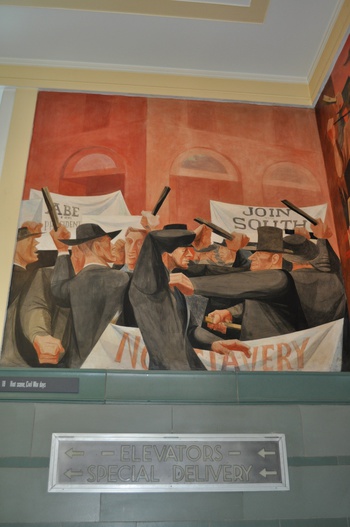 There used to be a post office annex on Spear Street in San Francisco. Today it is the Rincon Center, a glorified food court. However, many remnants of the post office, which closed in 1978, remain. That includes the 27 murals by Anton Refregier, a Russian artist who was contracted by the Federal Government, as part of the the New Deal, to paint these murals. He was paid a handsome $26,000 for his work. He began in 1941, but did not finish until 1948 because the War interrupted his progress.

These are are murals 17 and 18, as well as the entrance to the Rincon Center. Below are the descriptions of these two murals, provided by the post office.

17. Vigilante Days: "Vigilante committees formed during the 1850's in San Francisco to counteract excessive criminality and a weak city government. These committees handed down verdicts on their own terms. Vigilante justice was also popular in mining towns."

"This panel depicts vigilante actions in 1856 that resulted from the murder of newspaper editor James King of William by county supervisor James P. Casey. Casey was convicted and hung at the same moment King of William was being buried."

18. Riot Scene, Civil War Days: "During the Civil War, San Francisco split their allegiances between pro slavery Senator William M. Gwin and Union supporter, Senator David C. Broderick. This controversy over slavery led to violence, feuds, and shootings, but no major clashes. Sentiment went towards the Union after Lincoln was elected. California's predominantly Yankee population went on to support the Northern economy with products such as gold, wool and wheat."