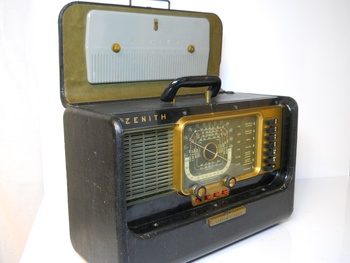 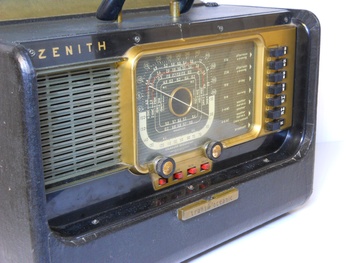 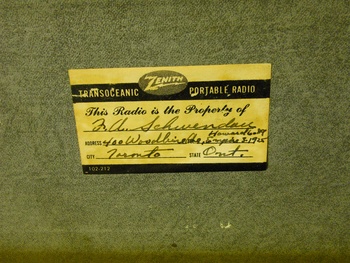 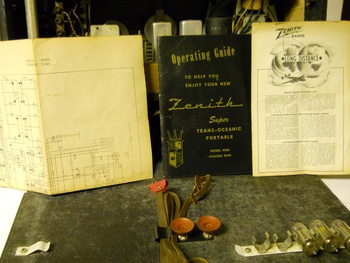 Good Afternoon CW Members--- 4:00 PM)2016-10-9
I found this Zenith shortwave radio few years ago, at a yard sale in my
neighbourhood, I remember being little late for visiting this yard sale that day, the fellow start packing up is stuff, but good for me observation alway's pay off, i notice the top antenna stick out of one of the box item, just ask ask,"what is it", he mention this is a shortwave radio belong to my Father, it's look like no one is interested, so curious i ask "why " he respond maybe I ask to much, so How much you asking for ??, I want $50, may I have a look !, sure he say, the rest is history for me, I buy this great Radio without negotiate the price.

This shortwave radio is very unique in my opinion, for fews reasons, in addition to be in pristine condition inside/out and working perfect, the original(owner) label of is father name and address still stick inside, electronic schematic plan, user book, world shortwave frequency paper, Custom Canada declaration and 3 spare tube lamp, WOW., I LOVE THIS RADIO, i use use it many time and reach very far place anywhere in the world.
Thanks to the little antenna(I fix the issue of not stay inside the case)

Many Thanks to Everyone for Viewing.
Alan

Zenith's founder, Commander Eugene F. McDonald, was a great admirer of advanced technological development and believed that his company's products should include the latest, most practical advances in a well-built product that continued to enhance the company's reputation. Of the many products of Zenith Radio, the 'Trans-Oceanic' series of portable radios were amongst the most famous.

McDonald was a keen yachtsman and outdoorsman and wished for a portable radio that would provide entertainment broadcasts as well as being able to tune into weather, marine and international shortwave stations too. He asked his company's engineers to develop prototypes to meet his criteria and by 1940 they had concept sets that were ready for production.

The Zenith 'T/O' began life in 1942 as the Model 7G605 'Trans-ocean Clipper'. Priced at $75, it was released in January but ceased production in April as Zenith shifted their production to war-related equipment. During this short production run, some 35,000 units were produced and sales data showed that many were sold to customers in the 'above average' income group. However, many also found their way into various theatres of war and in to the hands of appreciative servicemen—demand for a resumption of production at war's end was kept high.

The T/O was a dual-powered radio receiver; it could operate from electrical service AC or DC and via a pair of "A" and "B" dry cell batteries for portability. The batteries are obsolete but the early T/O models live on either due to the ability to use AC line or a battery made of modern cells (6 Ds for the "A" power and 10 9 volt transistor batteries for "B") or an inverter. Zenith used a selenium rectifier of later versions of the T/O, replacing rectifier tubes used on the earlier models. Inserting the power plug into a socket on the chassis or the side of the radio (depending on model) switched the T/O to battery operation.

The H500 'Super Trans-Oceanic' was introduced in May 1951 at an initial price of $99.95. It had a redesigned front face and incorporated many frequency coverage and electronic changes ordered by McDonald. There also was a small production run of "militarized" Trans-Oceanic's, ordered by the U.S. government.

After 1953, there was competition to the Trans-Oceanic from both Hallicrafters, with their 'Trans-World' series sets, and RCA, with their 'Strato-World' models.

In the spring of 1954, the 600 series was introduced with its 'slide-rule' type dial and a mains supply cord which coils inside the set on a spring-loaded reel. This model stayed in production, with minor changes, until the end of the T/O tube era in 1962.

During the tube or valve T/O model run, this receiver did not include an 88-108 MHz FM radio band.

Eugene McDonald died in 1958, but he was personally involved in the design changes to 'his' radio to the very end. In November 1957, Zenith introduced the all-new, nine transistor solid state Trans-Oceanic. The older tube-based Trans-Oceanic was continued in production until 1962.

In November 1957 the first of several transistorized Trans-Oceanics were introduced, the Royal 1000. As had always been the case, Commander E. McDonald helped in the design of the 1000. This was to be his last endeavor in the Trans-Oceanic radio, passing away soon after its introduction. The Royal 1000 had exactly the same frequency coverage as the A/B 600 series tube Trans-Oceanics with the addition of the 13/meter band. The new Royal 1000 also sported an all-metal cabinet design with the front cover opening to the down position. The log chart was located inside the flip-down door. Very early Royal 1000s sported a genuine leather covering marked as such. Another first for portable radios was the unique dial scale used in the 1000 and later series of Trans-Oceanics. The 1000 was designed with a cylinder dial scale that would rotate with the band switch allowing only that particular band scale to show.

Soon after the introduction of the 1000 model, a second model was added, the Royal 1000D. The only difference was the added LW band covering 150 kHz through 405 kHz just below the AM broadcast band. There were also slight cosmetic differences to distinguish the two models. Anthony J. Cascarano was the primary designer of the Royal 1000/1000D cabinets.[4]In 1962 the Royal 3000 was added and the 1000 eliminated while the 1000D remained in production through the 1968 model year. The 3000 added the FM broadcast band and eliminated the 13-meter band. Along with a few cosmetic differences, there wasn't much difference electrically between the new model and earlier 1000 series models aside from the addition of the FM subchassis and IF transformers. The 3000 used many of the same cabinet parts as the 1000/1000D, but required a bulging back cover to accommodate the additional parts used for FM.

Early 1000s and 1000Ds were battery-only with no provision for external power. This was considered acceptable because the battery life was much better than the tube-type models. 8 ordinary D cells would operate the radio for >500 hours, as opposed to ~150 hours for the tube models and their massive A/B battery. The 3000 was also introduced as battery-only. Later the 1000-1 and 3000-1 models were introduced with provision for an external power using what was one of the first "wall wart" type power supplies - a transformer, rectifier, and filter capacitor in a box with AC line connector that plugged into and hung from the wall socket.

In 1968 the Royal 7000 series Trans-Oceanic was introduced. The new model sported a completely new look and many improvements over the weaknesses of the earlier 1000/3000 series models. Besides a new look, a BFO was added for SSB/CW reception. Also a wide/narrow filter switch was added for increased selectivity. The 13-meter band was re-introduced along with extended coverage from 1620 kHz through 2000 kHz and the VHF weather band. The electrical design was an improvement in both selectivity and sensitivity, and used modern silicon NPN transistors rather than the previous germanium types. Sound quality was much improved. The internal mechanical design was quite similar to the earlier models, and still used a steel chassis and point-to-point wiring, rather than PC boards.

The last model Trans-Oceanic was the R7000 series introduced in 1979. This model now had complete coverage from 150 kHz through 30 MHz. Gone was the electrical band spread for improved tuning. The R7000 sported a new electrical design using modular circuit boards instead of the point to point hard wired chassis of all previous models. There were many other new features also such as dual tuning meters, squelch and several added bands such as Air, VHF 144 MHz through 175 MHz. The R7000 was built in Chicago for the first year but production was moved to Taiwan for the final two years, while all the models before had been made in the USA.

The new Royal line sold well, but Zenith's lead was steadily eroded. By the time of the release of the 'R7000' in 1979, fierce competition from Sony in Japan—who, with their digital readout tuning dial had, in many ways, a superior product—meant the end of a famous product line.

It is unlikely that this famous family of radios will ever be resurrected though there is a strong following of this most famous series of consumer radio gear. Today the Trans-Oceanic has become a popular radio of both collectors and non-collectors alike.