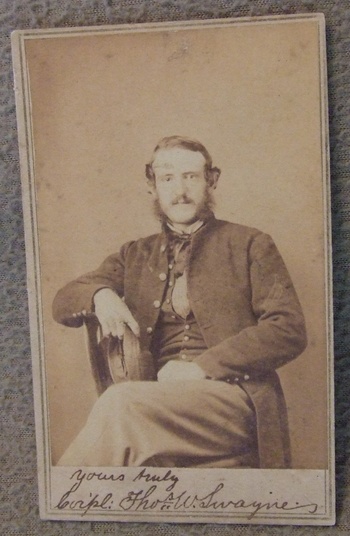 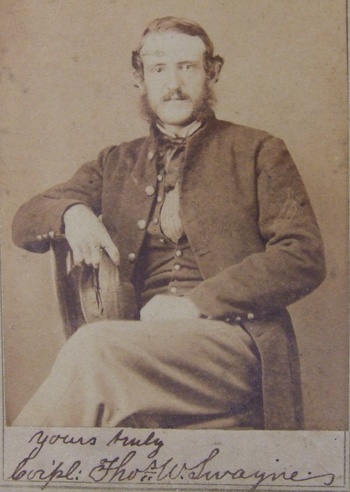 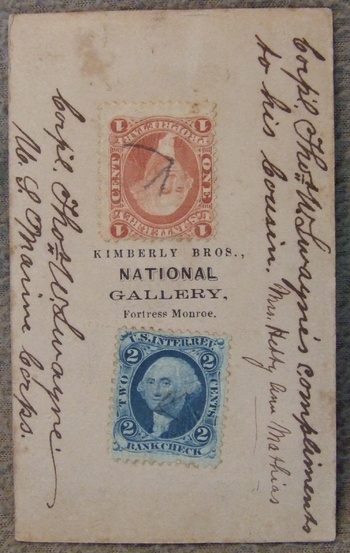 With less than 2,00 members at the start of the Civil War, USMC images are very hard to acquire. This RARE cdv photograph depicts USMC CPL Thomas W. Swayne.

Online records show that 19 year old Swayne, enlisted in the USMC at Philadelphia, PA on 30 MAR 1861 and was assigned to the USS Minnesota.

He served on the Minnesota for over 3 years. The USS Minnesota was the Flagship of the Atlantic Blockading Squadron and was part of the Battle of Hampton Roads. During which the ship ran aground and took several casualties after being fired on by the CSS Jamestown, Patrick Henry and Virginia (Merrimack).

In May of 1864, Swayne was first noted as being transferred to the USS Malvern. The Malvern was a captured blockade runner that was used to enforce the Atlantic Blockade. The ship participated in the Fort Fisher Campaign.

In late MAR 1865, Swayne was transferred to Norfolk Station, VA with a status of awaiting discharge from the USS Malvern.

He was discharged on 16 APR 1865 and returned to Philadelphia, where he worked for the railroad. He was tragically killed a short 5 years later in a train accident.

Swayne's signing of the cdv in three different places is unusual!

Tax stamps on the image would bracket it from 1 AUG 64- 31 JUL 66. Based on the CPL rank (18 SEP 64) and location, I would suspect the image was made close to his discharge from service.

Do not reproduce photos without my permission.