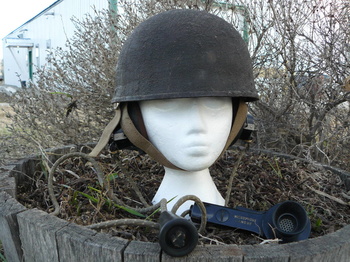 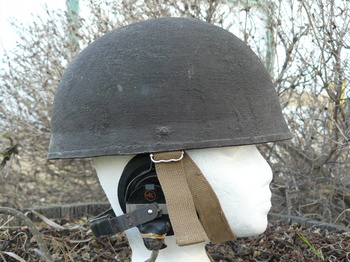 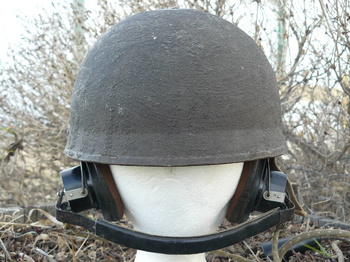 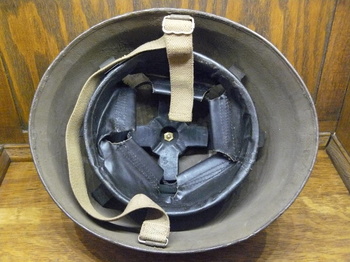 Thought I would share this I Mk I HSRAC I was quite happy to be able add it to my Canadian Commonwealth headgear collection as good examples of these are getting hard to come by and I found this one an interesting example.
The shell appears to have started off its life with a coat of khaki brown paint which is evident from the interior of the shell this should put the production date some time in 1943 .
The liner is a 1942 dated I.T.C. in a size 6 1/4 and the chinstrap is an early Mk III which is correct to the helmet my understanding is that all the early P type shells were manufactured by BMB.
The exterior of the shell has been over painted in a textured charcoal grey which IMO is war time applied I can find reference this type of charcoal texturing on a war time HSRAC in Lucy's book Tin Lids and two other publications as well as seeing one other RCAC issued Mk I and two other Mk II's painted as such belonging to members on the Canadian Military collectors forum.
These first started being issued to the RCAC in and around July of 1943 and there is period evidence that supports these can be seen worn by Canadian troops serving in the Theater Of Operations in Italy and or North Western Europe.
There resemblance to the F.J.helmet made them quite unpopular with the troops serving in the field were the Fallschirmjaeger were operating there Canadian military designation reference number is ( 1A19120 )
These can be found with either British or Canadian components and or a mix of both being used and it is not uncommon to see them field modified with Mk II chinstrap's,Canadian liners and the Mk I style liner securing nut and bolt
I have added the ZA2902 microphone handset No,7 and headphones which were used with the W,S 19,W,S 22, and or the W,S 43, ( with plug ) and are correct in this configuration to be used with the HSRAC.