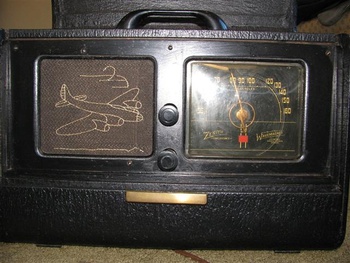 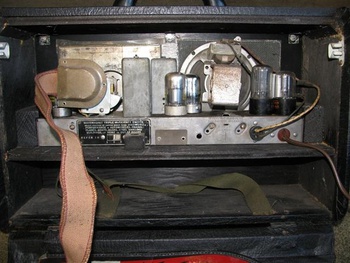 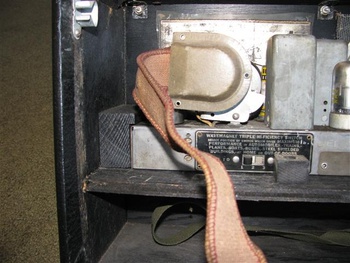 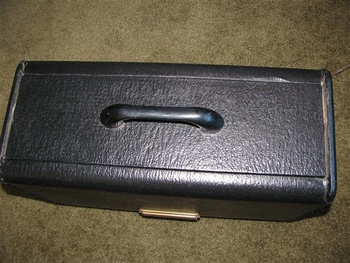 Here is one you don't see every day. I purchased this off e-pay a few months ago and just got around to restoring it. It has the chassis of a 6G601, and the case of 8G005 TO. Absolutly factory made. It appears that they must have run out of standard companion cases and used some 8G005 TO cases. Or maybe it was someones idea that didn't take hold. But regardless of the circumstance it had to have been put together by someone that had accesss to the cabinet before all the channeling was done for the wavemagnet wiring and snaps were installed and the hole for the wave rod antenna. The case had to have been covered before anything else could have been done to it. Zenith did not make their own cases, but rather had several different suppliers making them to their specs.
Note that there is no hole for a rod antenna, nor any wiring or wavemagnet in the lid. Take a look at how they set it into the case with blocks in both sides, and one to hold it tight up against the front of the case. Since regular companion radios have a chassis held in place by two screws through the sides. They also substituted a wood front for the plastic one.
Check out how they hold the wave magnet in place just like a companion radio. They did not do anything about the chart door just not attach anything inside it. After recapping and restriging it, it sounds good. A little deeper since it's in a bigger case. I always enjoy finding the odd ball factory substitutions. For a complete discussion on this radio check out this site. http://antiqueradios.com/forums/viewtopic.php?t=154325