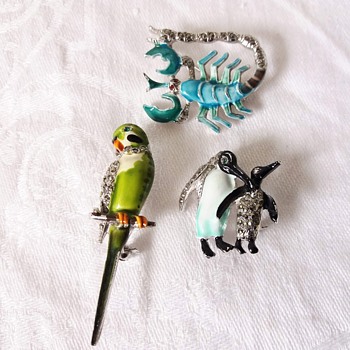 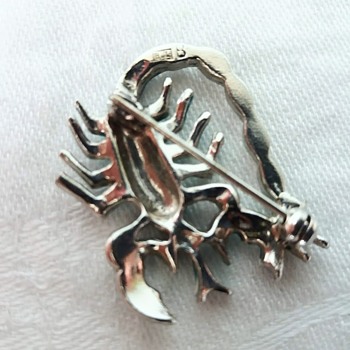 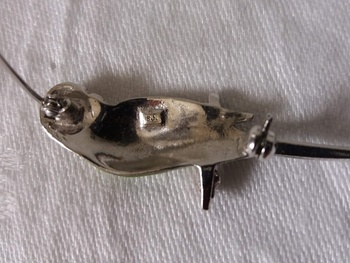 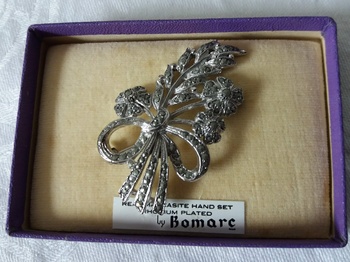 **Updated with new information, see below**
The green budgie brooch belonged to my Grandma, and she passed it on to me with another brooch in the late 70s/early 60s - I can't remember if she had just got tired of them or if I badgered her for them! She probably have had them a while, but I don't know how old they might be - 50s or 60s maybe? It's in great condition.

I recently bought the scorpion (my zodiac sign) and the penguins. They're all rhodium plated with marcasite and enamel, and coloured glass eyes. The scorpion and penguins are signed "BJL B" with a stamp on the back of the brooch. The budgie is signed "BJL" stamped on a raised block on the back of the brooch. I have also been lucky enough to find an original Bormarc brand box (see the update below for brand name details).

Looking into BJL, I could only find a couple of blogs saying "no-one knows what BJL stands for", but then I got lucky and found a book advertised (Marcasite Jewellery - History, Designers and Manufacturers by Patricia McMullen, 2016) which claimed to contain the information about the full name of the "enigmatic" BJL manufacturer.

**UPDATE April 2019**
I recently managed to find a copy of the book in the National Library of Scotland and found out the following which I have summarised in my won words below.

Bohemian Jewellers Ltd was formed in 1946 in Birmingham, UK. They produced jewellery under the registered trademark “Bomarc”. Almost all BJL costume jewellery is signed with BJL, with some pieces carrying an extra B in addition to the BJL mark. Occasionally pieces crop up that have no stamp, but can usually be confirmed as BJL by finding the same design that has been signed. (*I've also noticed that comparing these to similar brooches from another company, that BJL brooches all have bead-set marcasites, where the metal has been pushed over the stone to secure it. Some other brands have glued-on marcasite stones, so it's reasonable to assume that unsigned pieces with glued on marcasites are not BJL - my own observations, not from the book.)

Interestingly, they also made some sterling silver marcasite pieces. These carry the makers mark BJL with an upper-case D above the L along with other UK assay marks. This makers mark is registered to Bohemian Jewellery Ltd with the London Assay office.

In the 1960s, BJL joined forces with Ellisons & Co. Ltd. The Ellisons branch of the business was more high end, producing gold and silver pieces under the trademarks Elmarc and Zeeta. In 1971 the company changed its name to Bohemian Ellison & Co. Ltd, changing again in 1985 to Bohemian Ltd. The company closed in 2008.

A Bomarc advert dated June 1961 features a diving kingfisher, robin, and rose and orchid brooches. There are also a range of cameos, Limoges miniature painting brooches in marcasite-set frames, and a pendant with a large green stone in a silver or rhodium marcasite setting.