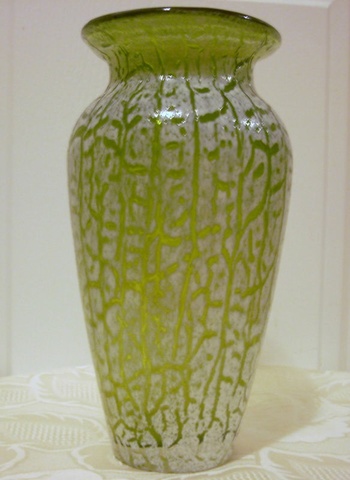 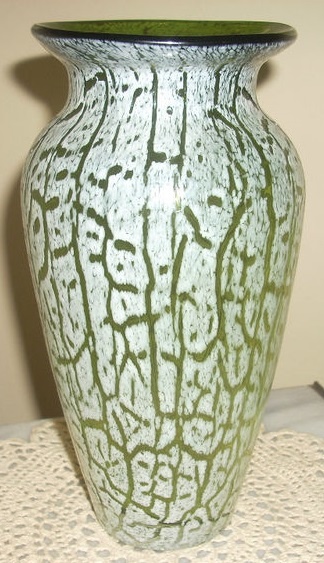 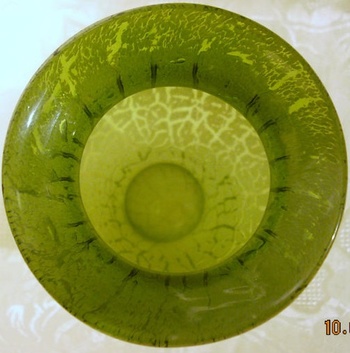 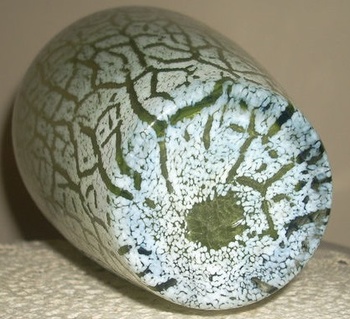 I have had this for about 5 years and have continued to be mystified by it. When I bought it, it had been attributed as Kralik, but when I showed these photos to knowledgeable "Kralik-o-philes" they doubted that origin. Somebody suggested that it might be Japanese from the '60s-'80s era. I just put it on a shelf in my library and haven't thought about it much recently. I thought I would solicit the advice of the collectors here, and now I'm very glad I did due to the fascinating conversation that ensued.

As you can see, it is a well made piece. It stands approximately 9" tall and is about 5" in diameter. The lip is polished and the pontil scar has been finished. The light green base glass has a white glass craquelle applied over the surface. When backlit, it has a soft effect, but when directionally frontally lit it shows the white snow or frosting more than the green. It seems to me like a good vase for Winter use!

After much discussion we have arrived at the conclusion that a modern Chinese company is importing these retro pieces under the name Margie's Garden. That's fine, because as they are sold new, there is a sticker identifying them. The problems arise when the stickers are removed and either uninformed sellers, or perhaps those less scrupulous, pass them off as Kralik or Monart worth substantially more money. This is a problem with glass "tribute" pieces in general, not just these, because I have seen modern Czech spatter and tango retro looking pieces with stickers. It would be just as easy for somebody to try to pass them off as Kralik, Welz, or Ruckl glass were the stickers removed.

It is important to shine the light of scholarship on this shadowy area of ignorance and deceit, and I thank all of those who contributed to this very interesting discussion. "FIAT LUX ET LUX FIT" :-)