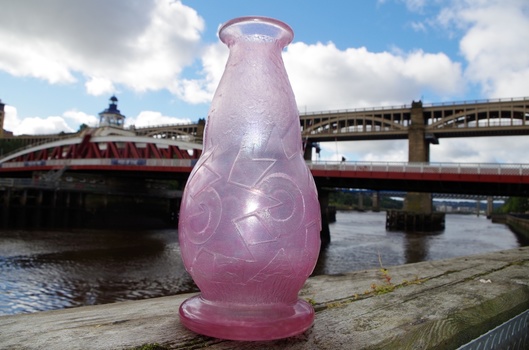 Degué was the brainchild of the enigmatic David Guéron (1892 – 1950). Born in Turkey to Spanish Jewish parents, he fled scandal at the age of 22 by joining the French Foreign Legion in 1914, only to be sent to the Western Front, where he was wounded and then pensioned out of the army.
Following the 1925 Exposition des Arts Decoratifs in Paris, he set up his glassworks in Compiègne, about 50 miles northeast of Paris, to produce tableware and other functional glass. Compiègne had been the site of the Great War Armistice. In 1926, the year after the successful Paris Exhibition, Guéron moved into the more lucrative production of French art glass.

He opened Verrerie d’Art Degué in Paris, a glassworks at Boulevard Malesherbes along with a gallery at 41, avenue de Paris to promote the art glass he named “Degué”. His cameo glass designs leaned heavily toward natural motifs, but also used brilliant colors that became his signature. His internally decorated vases, lamps and lampshades met instant success. Another Degué line used a sandblasting method to decorate monochromatic vessels with graphic devices and designs.

The Degué factory made vases, paperweights, bowls, perfume bottles, stemware items such as liqueur glasses, lightshades, chandeliers, art glass lamps, and half-round ceiling lampshades. These shades were composed of translucent layers of colourless glass internally decorated by swirls of colour.
Degué glass was destined for the collections of the few privileged Americans and French able to afford them. These extravagant works were rarely seen outside the homes of such collectors but influenced the taste and fashions of the day through their appearance in exhibitions and magazines of the late 1920s. The glassware made up to 1930 was colourful, whereas the items made after 1930 were frosted and more subdued, in response to the Great Depression.

Not content with the success of his own designs, Guéron copied the Art Deco designs of Charles Schneider (Muller Frères too). The resultant litigation lasted for six long years, until 1932 when the case was settled out of court. Both companies were financially devastated by the process.

However, the great artistic fame of the Degué glassworks is due to the collaboration with the talentuous French ceramist Edouard Cazaux from 1928. This famed ceramist is the author of some remarkable molded models. These ones are very stylized in a very thick molded glass to represent strong and geometric patterns.

The French ocean liner, Normandie is a showcase of French style and taste, but, above all, a symbol of France’s dominance of the luxury market. The Cristalleries de Compiègne ( Degué) was given the commission to create 6000 individual crafted glass panels for the room’s walls. This fabrication of hammered and chiseled panels with their engraved diamond patterns and eglomise finishes by famed French glass painter Auguste Labouret, was the largest assignment ever undertaken by the firm.
In 1936, due to the great strikes, the Degué glassworks stopped operating. It was officially closed in 1939 at the outbreak of WWII.

Sadly the Normandie caught fire and capsized in New York Harbour in February 1942. Fortunately, some of the great works that graced the ship were removed before the fire and can still be seen today.
The vase has deep acid effected glass with being in depth wheel cut in geometric angular designs
a very heavy piece in a subtle pink tone 13 inches high & 7 inches width
signed Degue