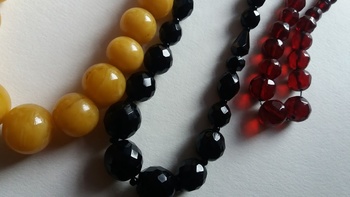 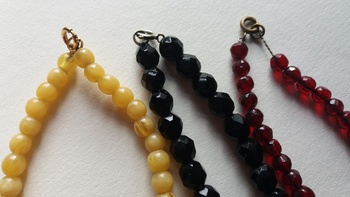 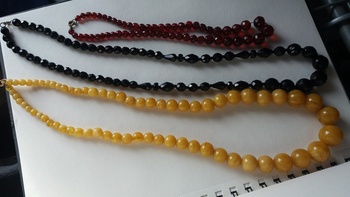 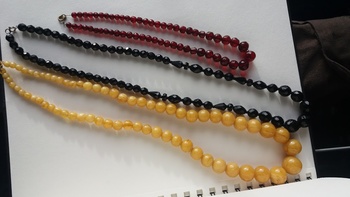 I have these three old necklaces and I can't figure out what they're made of. They're not glass, they're warmer than that so they must be some kind of plastic. I had thought Bakelite but I can't smell formaldehyde when I rub them with hot water. They are fairly heavy and make a nice noise. The black one and red one are pressed or moulded beads, with tiny pits in the surface of some of them that may have been formed by bubbles during moulding? Details of each one below!

The oldest one is probably the red one. It's stung on a chain and I'm pretty sure is 1920s or 30s in keeping with some other glass and gemstone ones I have that are also on chains. This one measures 16" and weighs 32g.

The yellow one is always what my grandma called her amber ne. It was originally hand knotted and I don't recall it having a clasp but my mum has had it restrung onto nylon with a new spring ring. This one measures 25" and weighs 64g.

The black one I think is more recent, I'd guess 1950s. There are a couple of scrapes on one bead which suggests that they might be a different colour with a black coating on them. This one measures 26" and weighs 62g.