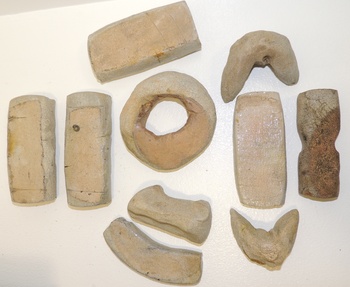 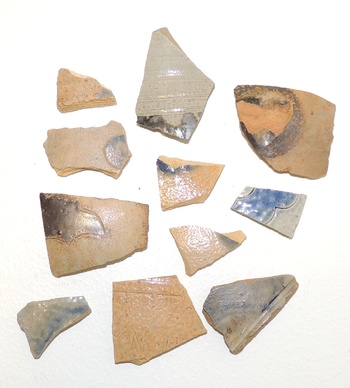 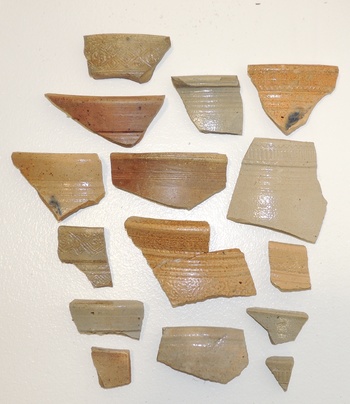 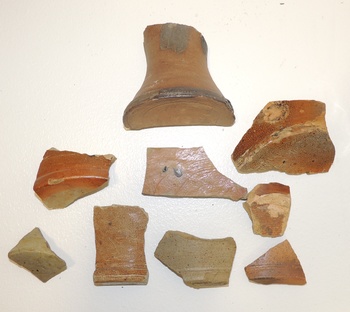 This post relates to the previous post, which was of a complete crock signed by Thomas Warne of Cheesequake, NJ. After hearing rumors that there was still shards at the 200+ year old pottery site, I decided to check it out. After scratching around for an hour or so I uncovered a pile of tightly packed kiln furniture. Literally thousands of pieces of kiln furniture, see picture 1. The majority of pieces were the rectangular pieces, the dog bones, and the crescents. I only found 2 doughnuts. There are several texts, including the Brenin text, that discuss the methodology used by the Warne & Letts firm. Their method was quite primitive, they use rolled up pieces of clay, and clay fashioned into doughnuts to keep the wares properly spaced during the firing. My finds certainly support the notion that this was, in fact, the firing practice of choice.

I went back a few other times, and each time I uncovered more and more interesting shards. Here are some descriptions of what is pictured above:

Picture 2: Pottery shards that show some type of slip decoration. The color of decorative glazes ranged from brown to light blue, green was also used but is less common. One of the shards clearly shows the holly leaf decoration present on the signed Warne crock in my previous posting.

Picture 3: Shards that show different types of lips/edges. Warne & Letts use various types of coggle wheels to decorate the lips or edges of their wares. One of the pieces clearly shows the intricate alternating pin wheel and diamond pattern. Others have horizontal line designs, or a teethed coggle design.

Picture 4: These shards are examples of different bases. The shard at the top middle is the largest, most complete that I have found. It seems to be the bottom of a tapered mug, that was most likely handled. It has a few of us stumped, because no piece like that has ever been attributed to Warne & Letts. Unfortunately, I was unable to fid the rest of the 200 year old broken stoneware mug decorated with blue slip patterns.

The area that I had uncovered is only about 20 yards away from the ruins of where the pottery once stood. The potters must have dumped their broken shards and old kiln furniture and broken bricks in the swampy, forested area.

I plan on going back to the site in a few weeks to see if the rain has washed the dirt off of anything new. I secretly hope to find a whole piece, although I know the odds are against me. A few years ago a man was scratching around the area just as I did, and to his surprise he uncovered a whole bottle that had the word "Brandy" incised at the top. It had some type of in production glaze flaw that made it unusable after firing, so the makers must have thrown it out with the rest of the broken pottery and old kiln furniture. I hope that I get so lucky as he did!!!!