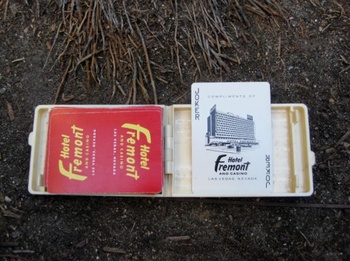 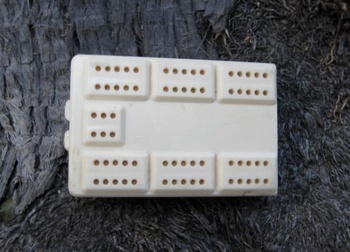 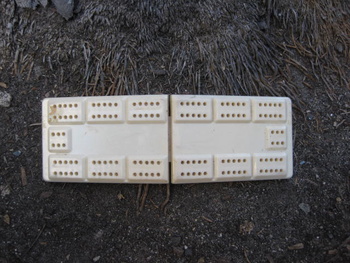 Another vintage hard plastic item, this one is a cribbage set from the Fremont hotel & casino, Las Vegas NV. The Fremont was built in 1956, located in downtown LV. As the strip became popular in the 70's and 80's this area was mostly frequented by hard-core gamblers and tourists looking for cheap lodging. Even after the renovation and revitalization of downtown LV - "the Fremont St. experience", I was still able to get a wonderful room here for $28 in 2009 - no longer!

I've stayed at hotels on the strip, including the creepy half-renovated Howard Hughes-owned (astronaut themed - the Apollo?, took the elevator to the observation deck and it was a gutted, construction zone -no windows or deck, no guards. The dream of an explorer! I loved it) I think it was in 1992 near Circus Circus. Las Vegas changes so fast, I'm always lost there.

Anyway, back to cribbage -yes, the case is dirty - it has tape smudge on it and the pegs are missing.