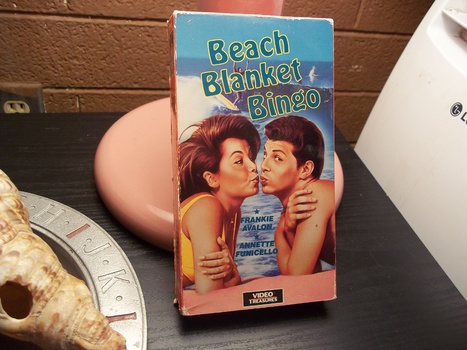 Frankie and Dee Dee and their beach friends watch a parachute jump concocted by press agent as a publicity stunt for singer Sugar Kane. The group become interested in skydiving and arrange to take lessons at Big Drop's school. Later, at a party given for Sugar Kane, Bonnie flirts with Frankie, sending Dee Dee into a jealous rage, but the quarreling is interrupted when Eric Von Zipper's Rat Pack motorcycle gang crashes the party. Meanwhile, Bonehead, one of the surfer group, is saved from drowning by Lorelei, a beautiful mermaid, and he falls in love with her. Believing that the press agent has devised another stunt, Sugar Kane allows herself to be kidnaped by Von Zipper; but the surfers lead a wild chase to save her with the aid of Lorelei and Bonehead. As Lorelei returns to the sea, Bonehead finds solace with Sugar Kane, and Frankie and Dee Dee resolve their differences
CAST OF MOVIE & WHO THEY PLAYED:
Frankie Avalon plays "Frankie
Annette Funicello plays "Dee Dee'
Linda Evans plays "Sugar Cane" (she was in Big Valley & Dynasty on TV)
Harvey Lembeck plays "Eric Von Zipper"
Marta Kristin plays" Lorelei" (the mermaid)
Deborah Walley plays "Bonnie"
Jody McCrea plays "Bonehead"
The beach dancing was a lot of violent shaking! Ha! Ha! and I guess doing the Twist or a variation. Oddly, they managed to stay upright and not grind down into the sand and disappear! Cute movie, and we teens all loved it as well as the several other "beach movies"
Annette was always a virgin, and Frankie was on good behaviour mode onscreen-They provided great songs! I know both Annette and Deb Walley have passed but don't have the word on any others. Do you?
--------------------------------------------------------------------------------
ALERT!!! Don't be scared of the alien object lower left of photo!!! That is the lower end of a huge seashell, and the natural hole is the escape route of the sea creature living in it!! SITTING In a pewter, vintage child's platter with alphabet and numbers.Maybe I will put it on later.