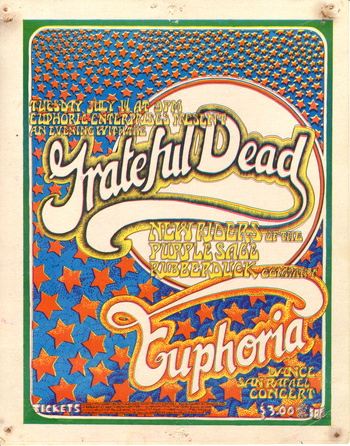 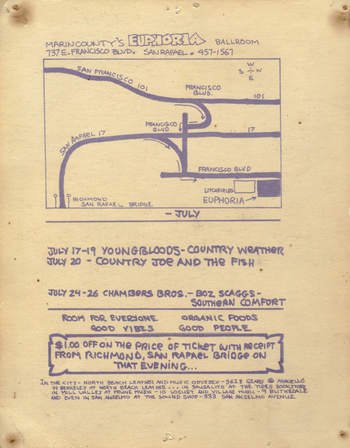 When I was 14 my parents were indulgent enough to let me attend a few local concerts on my own. My first Grateful Dead show was in my hometown at a dive called the Euphoria, which had been the Citadel and would become Pepperland. We went there a lot when I was a kid, as well as to the Bermuda Palms next door, where you could see bands like Clover or Commander Cody on Monday nights for a buck.

This postcard survived a couple of rainy winters in a tree fort behind our house, in part, I think, because it was printed on such heavy stock. Yes, those are rust stains around the thumb tack holes.

The night I went was memorable for countless reasons. First, Jerry Garcia was still playing with the New Riders in those days, so the guy was on stage basically all night. The Dead were doing acoustic sets during this period, followed by an electric set, or two. For that part of the show, Janis Joplin joined the band for a few tunes ("what do you know that I know," I think she said), including "Lovelight."

One interesting thing about this postcard, which was designed by a graphic company called San Andreas Fault, is that is does not have the date "July 16" handwritten into the white area below the word "Grateful." They did play a second night after taking the 15th off, so most of the cards and posters featured that scrolled info. Mine doesn't. Does that make it more or less valuable? Sorry, but I totally don't care. ;-)