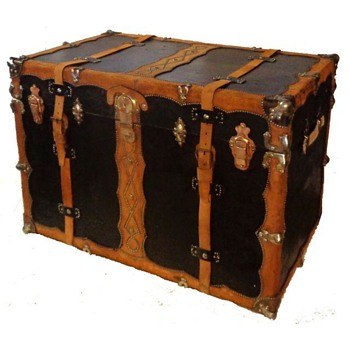 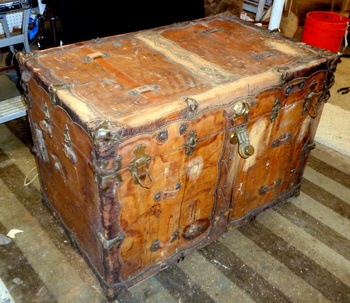 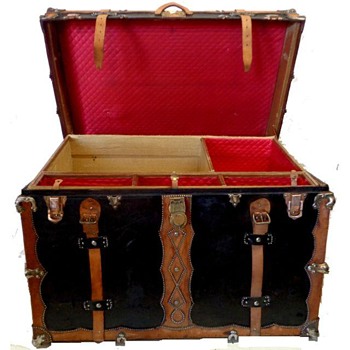 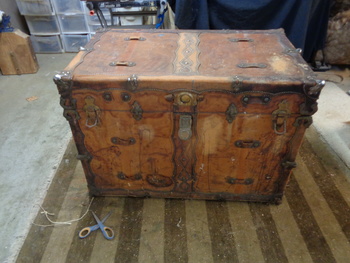 One of my favorite Led Zeppelin songs of all time!...wait! it's LEVEE not LEATHER! Oh well, close enough.
I was asked if I wanted to buy this large, oversized, HEAVY, dirty, beat-up, torn, stained and rotting trunk from a gentleman from Colorado and when he asked the question via email with photos of the piece, my immediate answer was, of course, "absolutely NOT"! Seeing that this beast was probably a real beaut back when new, however, we struck a deal which was for him to ship me the trunk at his expense and tell me what would be the least amount of money he would take for it, I would restore it at my expense and then try to sell it for whatever I could get and send him his money once we were paid. The thing was HUGE when it arrived and after closely checking it out, I regretted making the deal - a million+ nails in it, EVERYwhere and the exterior looked like it had been in a dump heap for years. So, being the glutton for pain and suffering that I am, I went at it, with my entire staff laughing at me all the while. The binding was crumbling, but only on the surface, so I said "AH HA!!, I'll take some sand paper and turn this binding into suede", which worked really well. And then, the large exterior surface areas...now what? How about...patching and gluing the tears and rips and then staining the whole thing black? "Ah HA!!, I said. And did just that. And what about the interior? All stained and ripped and dirty? "Ah HA!!, I said again, "Let's let my wonderful staff deal with this!!, which they did and performed a miracle, I might add! Clean and polish the hardware and nail heads, refit the handles and belts and then crank the volume for a victory party. Oh, and the best part...we listed the trunk and it sold the next day! And the moral of the story is - "If you feel bad when you're tryin' to find your way home, and you don't know, which way to go..." You know the rest..