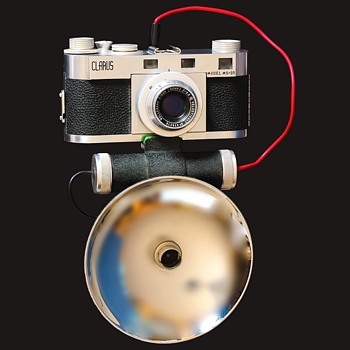 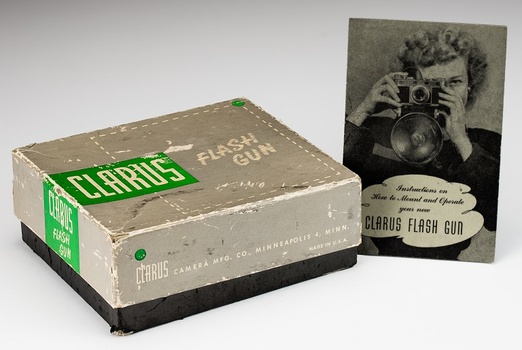 What the ... a camera that isn’t wood and brass in my collection? While the absolute core of my collection is really early gear, a couple special interest cameras slip in occasionally and the Clarus MS-35 is one of them. One reason is that the company was based in Minneapolis, MN. (Yep ... I live in the area.) It also represents an interesting time when American 35mm products simply didn’t compete with their overseas counterparts but attempts were made. Even though the Kodak juggernaut was in full force along with some other companies, there appeared to be a lack of precision American made 35mm equipment.

I acquired the Clarus a couple decades ago with its original, albeit weird, flash gun and box, and had forgotten about it until collector/historian Ken Metcalf, Graflex specialist and expert, contacted me after reviewing an article for his society’s publication. He mentioned the camera had a Minneapolis connection and asked if I knew about it. “Yes. A nice example is in my collection” was my reply. Ken was somewhat surprised with my confession: “I was surprised to learn that you had the Clarus, especially as I could not find any brass or wood on the camera.”

Collecting is fun in so many unexpected ways!

Lots of Clarus information is online and a new article looking deep into the camera’s features and legacy will be published early next year (2017). In a nutshell, the MS-35 was introduced in 1946 and lasted until about 1952. In 1947, advertised pricing was $122.75 with case. Adjusted for inflation, that’s about $1,505 in 2015 dollars. Although somewhat expensive, it was roughly one-half the cost of the [then] current Leica model. The MS-35 is a solid (chunky) camera made of die cast steel instead of stamped metal. On paper it had decent features and specifications; robust build, focal plane shutter, interchangeable coated lenses, long-base for a coupled rangefinder, etc. Over the years, it went through several design changes. Unfortunately, early versions had shutter problems which persisted long enough to ruin the camera’s reputation.

As a collectable, the MS-35 is somewhat common and early examples are typically found with mechanical problems. Aside from having a working shutter, my later post-1948 example is interesting because it was acquired with its original bottom mounted flash gun. The setup looks awkward yet in-hand the balance is somewhat good if you tolerate the in-your-face sync cord. A bracket was also available to mount the flash on the camera’s top accessory shoe.

Regardless, some questions I often ask when adding cameras to my collection include “why was it made”? What is it about the camera - its value proposition - that is supposed to resonate with buyers? Who would use it? Etc. Clarus’ 1947 instruction book’s forward states:

“Here’s something really new in American cameras. A precision built 35mm camera that will never miss the picture.”

That statement seems a bit odd; suggesting that American 35mm cameras were either not very good or non-existent. Using Clarus’ marketing comment as a starting point, my first thought was: How was it that Germany (and later Japan) had better reputations for 35mm cameras than the United States? ... and more questions ... Why was Clarus trying to compare itself to Leica in some of their advertising? If this was the case, how were these companies, in unstable German and Japanese economies, able to produce highly regarded 35mm cameras?

Taking into consideration Germany’s and Japan’s post-WW2 economic stabilization efforts by American Joseph Dodge, these country’s inroads to successfully marketing precision 35mm apparatus in the U.S., and some MS-35 advertising, it could be that the Clarus Camera Manufacturing Co. was a startup with a market proposition of bringing American quality to 35mm apparatus by making a camera comparable to Leica but less expensive.

In other words, at the time of Clarus’ MS-35 (and other American attempts at quality 35mm cameras such as Kodak’s Ektra and Graflex’s offerings), German and Japanese 35mm equipment were already on their way to dominating the American 35mm market. What’s interesting is the acceptance of German and Japanese 35mm cameras was decades ahead of their other mainstream products (i.e. cars, electronics, etc. ) which would eventually lead U.S. markets.

It appears the transition to non-American 35mm cameras accelerated during the WW2 years. For example, late 1930s to mid-1940s photojournalists already discovered precision, miniature 35mm cameras from Germany and Japan; and word was spreading about the quality, reliability, and optical sharpness of Leica, Nikon, and Contax cameras. When the renowned Magnum Photo Agency was founded in 1947 shortly after WW2 ended, two of its four founders, Robert Capa and Henri Cartier-Bresson, exclusively relied on Contax and Leica cameras. Additionally, throngs of military personnel, in their teens and twenty-somethings, would be returning home having seen, used and sometimes purchased these 35mm marvels; representing a new generation of consumers ready to influence the direction of future photographic equipment purchases and designs.

Even while growing up with inexpensive cameras (Brownies and so forth) and finally buying my first 35mm in the 1960s; there was an ever-present desire of eventually owning a professional grade camera made by Leica, Contax, or Nikon. Granted, there were other companies but their products didn’t have proven field experience and the strength of pro photographers’ word-of-mouth acknowledgments. And at the time, there didn’t appear to be any comparable American equipment.

Nonetheless, the Clarus is a professed ‘guilty pleasure’ and curiosity. And while it dates to the late 1940s, I see it as a ‘new’ camera hanging out with my early wood and brass collection.