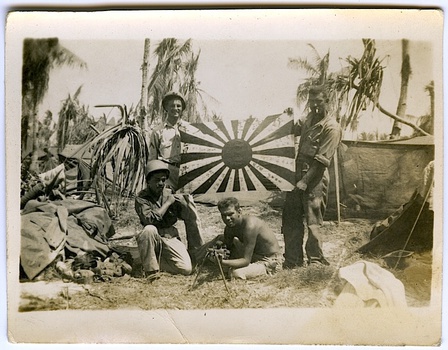 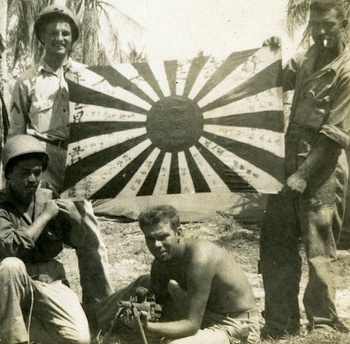 This photo I got in a group of photos at an estate sale. I think this flag is what they call a 'battle flag' with the radiating stripes symbolizing the rising sun. --I often wonder if the rising sun idea has anything to do with the interest in Japan for Coleman lanterns. The coleman logo is a rising sun. I recall sending a few lanterns I had on eBay a while back, to Japan.--

I asked my Dad about picking up souvenirs, he said they never did because the going was usually so tough that they had all they could do just to carry their own equipment. He says sometimes they were so tired they could hardly put one foot in front of the other. He is proud of the fact that he was always able to carry his own load as sometimes someone would "give out" and others would have to carry his load too.
He did bring home several weapons but they all came from the huge piles of surrendered weapons when they occupied Japan after the war. I'm guessing that's where most of the war souvenirs came from unless someone had access to shipping them home or some way to store and move them. - My Dad was with the Americal Division, 132nd Inf., Co K, Weapons Platoon. He joined the 132nd just after Guadalcanal and was with them on Bougainville, Cebu and Japan.