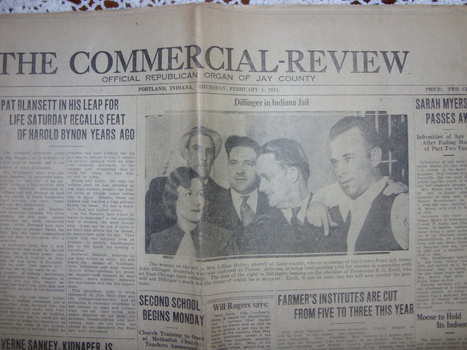 feb 1 1934 the comercial review portland ind paper (my home town )saying john dillinger in indiana jail dillinger was born in indy. the woman on the left is lillian holley sheriff of lake county who is in charge of the crown point jail where john dillinger who was captured at tucson arizona is being held pending trial for murder in connection with a east chicago bank robbery. the man on the right is john dillinger notice dillinger is leaning on the prosecutor e. g. estill who is seeking the death penalty for dillinger and estill has his arm around dillinger. he broke out of the jail with a fake wood gun and five months after this pic he was killed in a shoot with the f. b. i. after leaving a movie theater