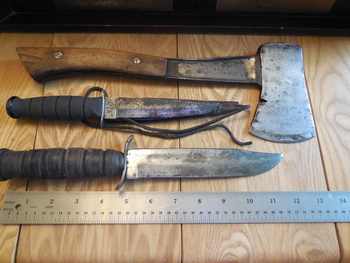 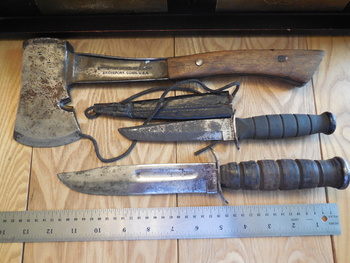 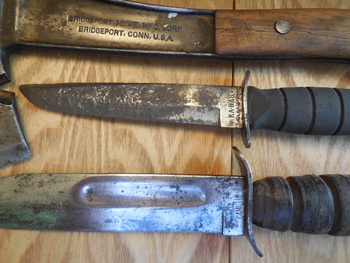 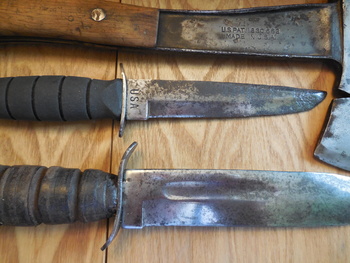 I bought these at the flea market this past Sunday, all from one seller. They were all in a large box with a lot of other things, and so rusty that I could hardly read the names on them. The smaller Knife was in a leather sheath, when I took out, I saw the blade was badly rusted, but could read USA on one side, and thought for the right price it might be worth saving. The large military fighting knife had surface rust but I could read CAMI and thought it was a Camillus, and the blade was still very sharp, so again, right price, good find. The hatchet was rusty, and the handle was loose, on the steel shank, and had a crack on one side, but I could read BRIDGEPORT, on one side of the shank, above the handle, so I thought it might be US made. I asked the seller how much for the three of them, he looked and said five, or ten? before he got out ten, I gave him a twenty, and said, how about twenty? He took my offer! LOL
After I got them home, and did a quick scrub with 000 steel wool, I could read the words on them better, the small knife, KA-BAR over OLEAN. N.Y. , and on the other side the USA that I saw before. It has a rubber grip handle, the blade is 5" long, with an overall length of 9 1/4", the blade still has an edge, but needs a lot of work. The leather sheath had a small swastika scratched into it, something a kid might do, and really doesn't go with the knife anyway. I'm not sure about this knife, fighting, hunting, or age.
The large military knife says U.S. over CAMILLUS on one side and no other marks. It has a pressed leather handle grip, with a rectangular hole in the butt cap, with a rivet going through the shank, and an s curve guard between the blade and handle. The blade is 6 7/8", with an overall length of 11 7/8". It's after WWII-Vietnam
The hatchet is just like a Boy Scout hatchet, but has no insignia. It says Bridgeport, on the head, and BRIDGEPORT HDWE. MFG. CORP. over BRIDGEPORT. CONN. U.S.A., on the shank on one side, and on the other side says U.S. PAT. 1,830,663 over MADE IN U.S.A. It's an all steel head and shank, with a 2-part wooden handle, riveted on at 2 points through each, and has a nail puller at the bottom of the blade. the blade needs dressing, but not bad. It could use a new handle, or at least tighten the rivets. I don't know when this was made.