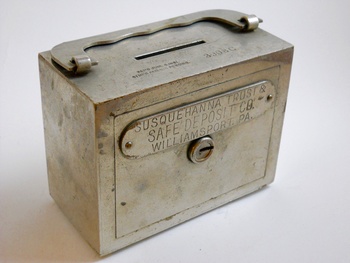 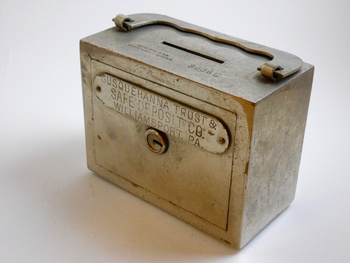 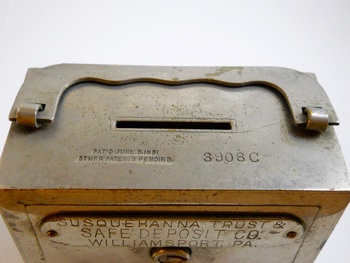 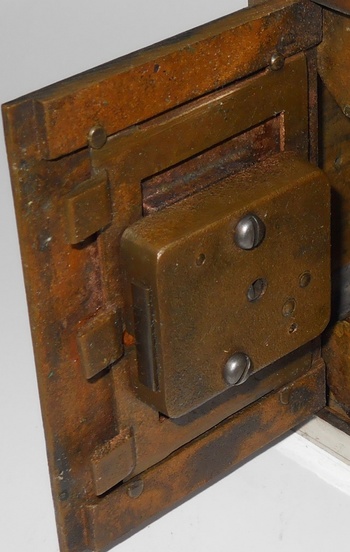 The Susquehanna Trust and Safe Deposit Company was organized in February, 1800, and commenced business in the Weightman Block on West Fourth street in the same month. The authorized capital is $500,000, of which $300,000 are paid in. In July, 1891, the bank took possession of its present quarters, erected by the company and known as the Trust Building, a massive, elegant, and substantial structure, complete in all its appointments. The vault is a marvel of solidity, and the financial standing of the institution is on a par with the structure it occupies. The first officers were: President, Robert P. Allen, who died on the 16th of December, 1890, and was succeeded in January, 1891, by E. A. Rowley, the present incumbent; first vice-president, Henry Rawle; second vice-president, E. A. Rowley; treasurer, Samuel Jones; secretary, Hiram Mudge. The present officers are: President, E. A. Rowley; first vice-president, B. C. Bowman; second vice- president, John Lawshe; treasurer, Samuel Jones, secretary, Hiram Mudge; solicitors, Coryell & Collins.

John Grandin Reading, fifth son of Philip Grandin Reading, was born at Frenchtown, New Jersey, March 1, 1859. He was graduated at Lafayette College in 1880, after which he took up the study of law, and in 1882 was admitted to the bar of Lycoming county, Pennsylvania, and is engaged in the practice of his profession at Williamsport, Pennsylvania. He was a director of the Lycoming National Bank, and is now president of
the Susquehanna Trust and Safe Deposit Company. He is a member of the Brandon Park Commission of Williamsport, president of the councils of that city, and a member of the State Bar Association.
Mr. Reading married, November 18, 1886, Clara Fleming Allen, who was born at Williamsport, Pennsylvania, October 13, 1864, daughter of Robert Porter and Ellen Evans (Fleming) Allen. Their children are: Ellen Allen, born February 6, 1888, and Evelyn Evans, born March 29, 1893.
Mrs. Reading is a descendant of Isaac and Lena (Paulhamus) Allen. Isaac Allen came from New Jersey about 1794, and settled in the Valley of Lycoming Creek, Lycoming county, Pennsylvania. The line of ancestry is traced through the several generations as follows : Charles Allen, born in Hunterdon county, New Jersey, September 24, 1791, died in May,
1882. Robert P. Allen, born in Armstrong township (now South Williamsport), Pennsylvania, February 6, 1835, was educated at Dickinson Seminary and Lafayette College, and was an eminent attorney-at-law. He was a Presbyterian in religion, a Democrat in politics, and a volunteer soldier during the Civil war. He was a member of the senate ofPennsylvania two terms, and president of the Susquehanna Trust and Safe Deposit Company at the time of his death, December 6, 1890. He married Ellen Evans Fleming, who was born at Williamsport, Pennsylvania, July 30, 1841, daughter of Robert and Esther (Evans) Fleming, and a descendant of the Evans family of Gwynedd. Robert Fleming was a descendant of the Fleming family of Chester county, Pennsylvania, afterwards of Clinton county, same state. Their daughter, Clara Fleming Allen, who was educated in the private schools of the Misses Wilson, in Williamsport, and of Miss Anable, of Philadelphia, and a member of the First Presbyterian Church of Williamsport, became the wife of John Grandin Reading, as mentioned above.