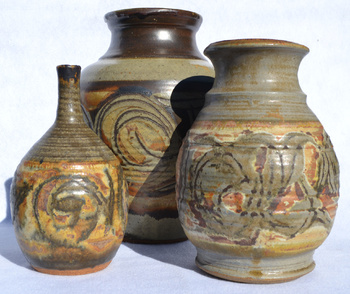 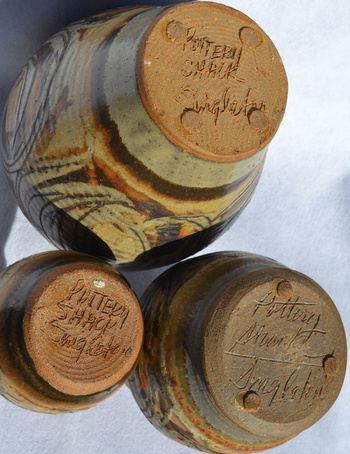 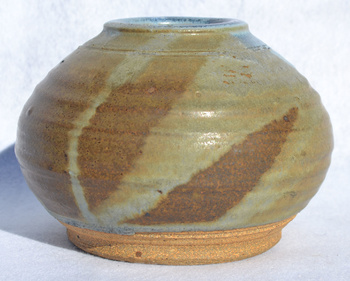 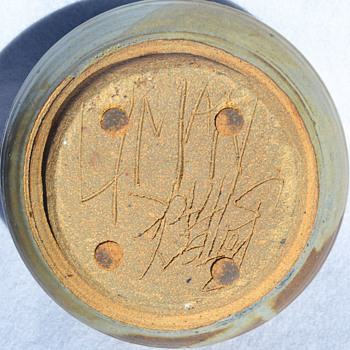 The Pottery Shack in Laguna Beach, California was, for many years, a cherished landmark. It began in 1936 when Roy and Van Childs bought a closed restaurant's property, hauled in a truckload of Bauer seconds, and created a colorful entrance to the Laguna Beach "Art Colony". This venture continued for the next 68 years.

Early on, as the business developed, there was an emphasis on the craft and demonstration potters were employed to throw pots while shoppers watched. Almost every college ceramics student from the 1940s onward did a stint there. Many went on to become well-known ceramic artists in their own right. (Here's where the contestable information begins!) NONE of that work was saved. It was never even fired. Potters would throw and re-throw the same clay for hours.

The Childs family retired in 1972 and ownership was transferred to Pier One Corporation. In the late 1970s (and lasting only into the early 1980s) the pieces thrown by the demonstration potters were fired on the premises so the entire pottery making process could be observed. These are the pieces found today inscribed "Pottery Shack" with various artist signatures.

Shown are pieces by "Singleton" and "Lyman". Both of these artists are unknown at present, as are most of the other signatures even if a full name is known (like Jack Taylor or Elsie Coakley). The largest of the Singleton pieces stands 11" tall. The Lyman piece is 5" tall with a 6" diameter.

If anyone has any knowledge of these or any other Pottery Shack demonstration potters, I would love to hear it.