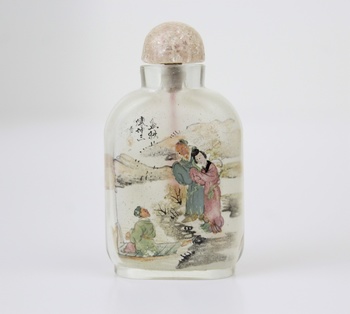 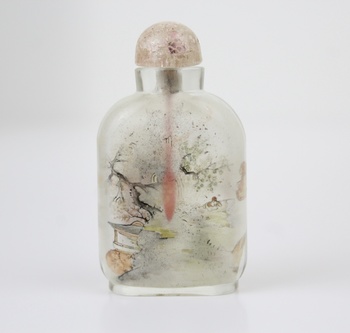 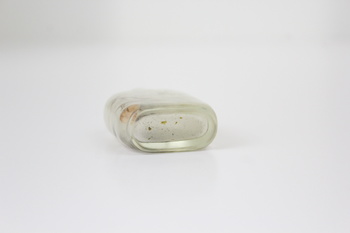 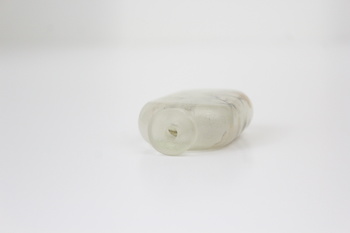 I really like this bottle even though the colors are a bit faded and some of the art on the reverse is obliterated.
You can still read his signature, and he has such a distinct style!
I have a larger bottle of his that is unsigned but the artwork on that one is in wonderful shape.
On this one the opening to the bottle is extremely small making the painting even more impressive.

A little history about the artist from Sotheby's:
Chen Zhongsan is a late-comer in the Beijing school whose dated bottles span a little over a decade between 1907 and 1919. He maintained his own distinctive style throughout his career. He was obviously a commercial artist and primarily a decorative one, as were so many of the followers of Zhou Leyuan, but some of his work rises above the merely decorative. He is perhaps better viewed as a folk artist, so that instead of seeking in vain for lofty brushwork and other hidden languages of Chinese art, one can concentrate on the naïve, childlike charms of most of his subject matter, which is always rewarding.
He borrowed subjects from other commercial artists without fear or favour but always managed to infuse them with his own distinctive style.

Chen Zhongsan painted almost exclusively in glass, as did a number of the more decorative artists of the period, suggesting that there was a price range beyond which these artists were not able to sell their works too readily, prompting them to confine themselves to the cheapest material available for painting. He also seems to have used a range of rather fatter glass bottles than was usual for the school. 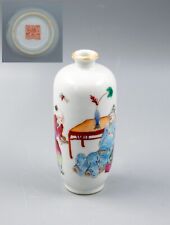