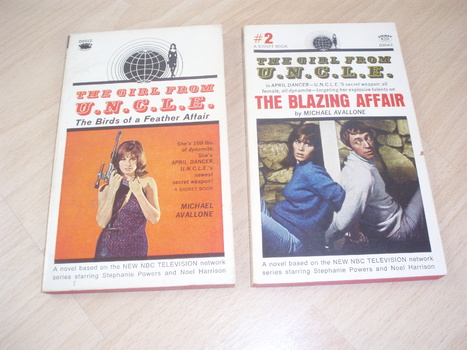 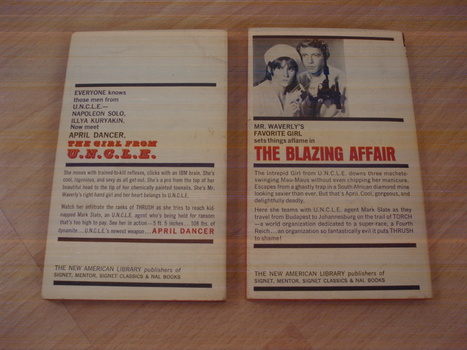 The Girl from U.N.C.L.E. is an American spy fiction TV series that aired on NBC for one season from September 16, 1966 to April 11, 1967. The series was a spin-off from The Man from U.N.C.L.E. and used the same theme music composed by Jerry Goldsmith, which was rearranged into a different arrangement by Dave Grusin.
The Girl from U.N.C.L.E. stars Stefanie Powers as American U.N.C.L.E. agent April Dancer and Noel Harrison (son of Rex Harrison) as her British partner, Mark Slate. Leo G. Carroll plays their superior, Alexander Waverly. ( Alexander Waverly is also Napolean Solo and Illya Kuryakin's superior in The Man from U.N.C.L.E. ) The character name "April Dancer" was suggested by James Bond creator Ian Fleming who was a consultant in the creation of the parent program shortly before his death.

The series was not as successful as its parent program and was cancelled after 29 episodes due to low ratings.

These two 1966 "Signet" pocket books are written by Michael Avallone.
Michael Angelo Avallone (October 27, 1924 – February 26, 1999) was an American author of mystery, secret agent fiction, and novelizations of TV and films. His lifetime output was over 223 works published under his own name and 17 pseudonyms.
There were a total of 5 books for the GIRL FROM U.N.C.L.E.: The first 2 by Michael Avallone and the other 3 by writers for "Ace" publishers who took over after the first 2 books.