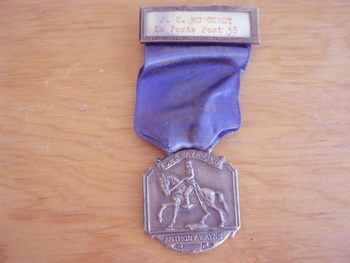 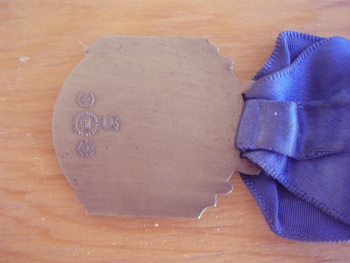 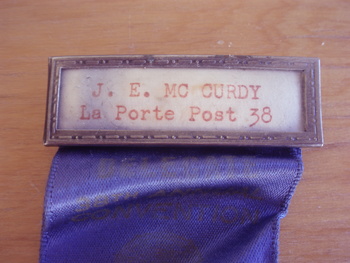 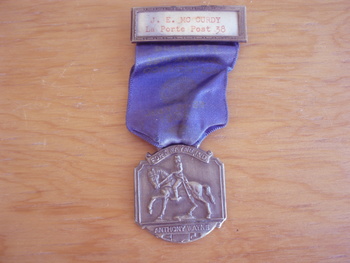 I came across this Delegate Annual convention pin at a garage sale. This belonged to a Delgate mister J.E. MC Curdy. The year has faded on the blue ribbon so I am guessing it is either July 21-23 1950, 1956, or maybe even 1960. Pictured on the horse is General Anthony Wayne and the back is marked by the makers: Bastian Bros. Co. Rochester N.Y., also IMEU local no? it says union made IJWU No.9 and a partialy faded association of machinists.
A little history about General Anthony Wayne:

In 1790, George Washington ordered the United States Army to secure Indiana Territory. Three battles were fought at Kekionga against Little Turtle and the Miami Confederacy. Miami warriors defeated U.S. forces in the first two battles. Anthony Wayne led a third expedition resulting in the destruction of Kekionga and the start of peace negotiations between Little Turtle and the U.S. After General Wayne refused to negotiate, the tribe advanced to Fallen Timbers where they were defeated on August 20, 1794. On October 22, 1794, U.S. forces captured the Wabash–Erie portage from the Miami Confederacy and built Fort Wayne, named in honor of the general. ( From Wikipedia )